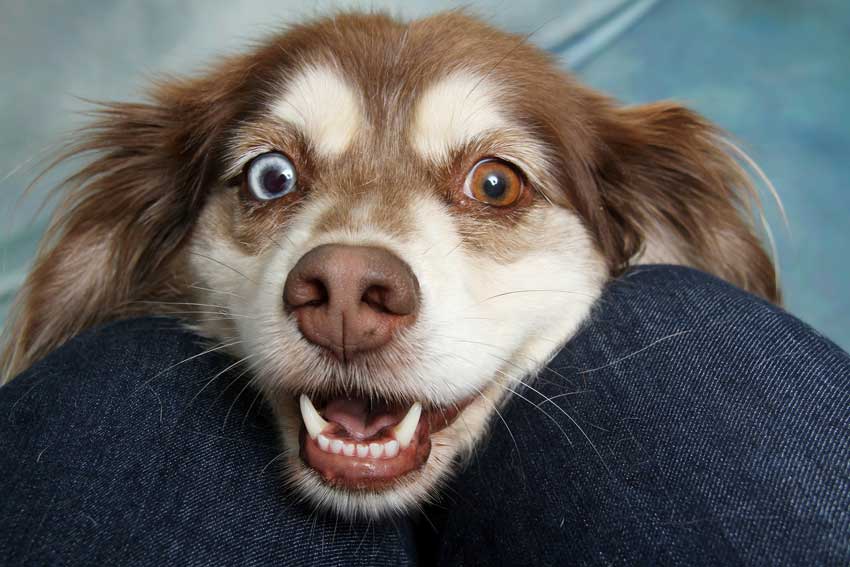 For ages, a lack of hard scientific evidence led many people to take for granted the peculiar notion that dogs can only see in black and white. Dogs are hopelessly color blind, the familiar story goes, and rely predominantly on their senses of hearing and smell to get around. The idea has gained so much traction over the years that nowadays it’s more or less accepted as common knowledge. But is it true—are dogs color blind? The answer is a little more nuanced than a simple “yes” or “no.”

The Mechanics of Color

In order to understand color perception, it’s necessary to know a little bit about how the eye works. Every eye, regardless of whether it belongs to a human, a dog, an eagle, or an iguana, makes use of two different types of special photoreceptor cells that work together to capture light and translate it into visible images. These two types of cells are known as “rods” and “cones.”

The first type, rods, make vision possible at low light levels, as they’re sensitive enough to be activated by just a few stray light particles. The second type, cones, kick in in brighter conditions, and offer far greater sharpness and clarity than rods. It’s cone cells in particular that allow the eye to detect color.

The retina of the human eye contains somewhere in the ballpark of 6 million cones, each of which is designed to pick up one of several uniform wavelengths in the visible spectrum. This abundance and diversity of cone cells has gifted human beings with what’s known as “trichromatic” vision. In other words, we’re able to perceive three different primary colors (red, green, and blue, specifically), including varying shades of each.

Any time you focus your eyes on an object in your surrounding environment, your retinas hone in on these three hues, blend them with other pieces of visual information, and ship them off via the optic nerve to the brain, where they’re synthesized into rich, detailed images. Voila! The miracle of sight.

So what about dogs? The basic process that underlies color vision is almost identical in canines, but with one key difference—the number of colors taken in.

What Colors Can Dogs See?

Whereas it was previously believed that dogs lacked the ability to perceive color at all, a growing body of contemporary research has successfully proven that dogs’ retinas contain two different types of color-perceiving cone cells. As a result, dogs (along with most other mammals) are now understood to possess “dichromatic” vision, meaning they are only capable of detecting two colors, namely blue and yellow. This limitation gives them a visual experience comparable to a person with red-green color blindness.

The most accurate answer to the question “are dogs color blind?”, therefore, is “kind of.”

Hearing that your dog can only perceive two colors may surprise you, especially if you’ve been buying Scruffy the red chew toys for years because you thought they were his favorite. But there’s no need to pity your pet or worry about them stumbling into a dangerous situation. While it’s true that dogs can only see blue and yellow, it turns out that they can see them quite well, as they’re able to make out a fairly wide range of subtle shades within each section of wavelength.

What’s more, dogs have superb night vision, thanks to their large pupils and high concentration of light-sensitive rods near the center of their retinas. They also excel at detecting even the most subtle motions, which is why they’re such great natural hunters. In short, a dog’s vision is perfectly suited for the activities it evolved for and enjoys the most.

Now that you have a better idea of how your dog sees the world, you can take steps to improve the way it interacts with its environment.

For instance, if you’re the owner of an energetic breed that loves nothing more than a spirited game of fetch, consider making the switch to high-visibility balls, frisbees, and other playthings. That way, your dog will really be able to zero in on the source of the movement rather than relying on motion detection alone to pick it out of an undifferentiated background.

Another possible option is to start pad-training puppies using only blue or yellow pads, which they’ll be more likely to notice when nature calls. Many products already come in these colors for precisely this reason, but it never hurts to make sure when the alternative is having to scrub poop out of the rug.

Likewise, vision-impaired pets and older dogs that are losing their eyesight may benefit from the addition of more blue and yellow bedding, accessories, and toys around the home. Since they’ll be able to discern these items more clearly, they’ll have an easier time finding their way around.

Can dogs see color? The question of whether or not dogs are color blind is based on a popular misconception, one that we now know is only half true. Dogs can see color, only in fewer shades and less overall detail than humans and other sight-dependent animals.

Blue and yellow are the two primary colors that dogs are equipped to perceive. Within these slices of the visible spectrum, however, they are capable of recognizing multiple gradient shades, as well as a wide range of gray tones that aid them in navigating the early morning and twilight hours. The rods and cones in a dog’s eyes naturally and effortlessly redistribute their workload as light conditions change.

Dichromatic vision may seem like a disadvantage to those of us who are used to marveling at all the colors of the rainbow, but make no mistake—dogs, on average, have very good vision, which serves to complement their more developed senses of hearing and scent. This trifecta of sensory specialties is what enabled them to survive in the wild for thousands of years, long enough to earn the well-deserved title of man’s best friend.