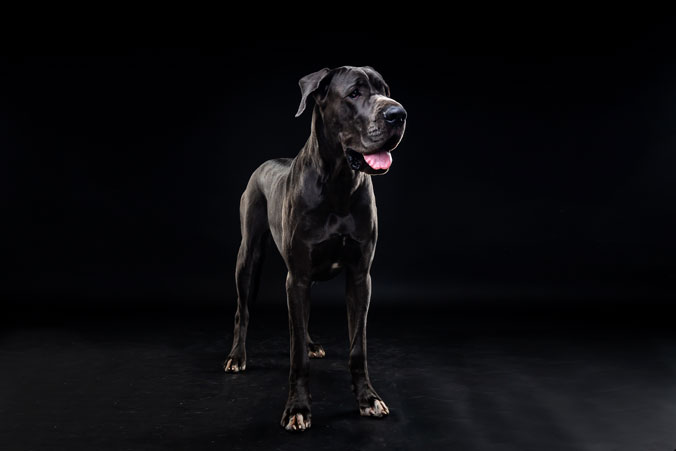 The Black Great Dane is a large and powerful dog that often surprises people with its gentle nature. These dogs can grow up to be very big, but they are also known for being calm and docile. If you’re thinking about adding a black Great Dane to your family, here are five interesting facts you should know about these amazing dogs.

1. Black Great Danes are German in Origin, Not Danish

Great Danes of all colors are gentle giants, originally bred in Germany over 400 years ago. There are conflicting reports of the breed’s exact origins, but most experts agree that the Great Dane was developed from a mix of Irish Wolfhounds, English Mastiffs, and German Boarhounds. The breed was further refined in Denmark during the 1800s, resulting in the dog we know today.

The dog derives its name from the Grand Duchy of Hamburg, which was once a part of Denmark. The black Great Dane is an intelligent and loving companion, known for its loyalty and protective instincts. With proper training and socialization, this gentle giant can make a wonderful addition to any family.

Black Great Danes are definitely one of the most eye-catching dogs. Not only are they large, but they also have a very muscular build that shines with the contour of their physique. The average black Great Dane weighs about 150 pounds and stands about 30 inches tall at the shoulder. But despite their size, they are actually quite graceful and agile.

3. The Breed Color is Becoming Increasingly Popular in North America

The dark-coated, colossal frame has become an iconic representation of the Great Dane breed in the United States.

In the late 1800s, Great Danes first became popular with royalty and upperclassmen. The breed was developed as a hunting dog that could bring down big game such as boar, elk, or deer. Soon after, Great Danes were brought to North America where the black Great Dane first caught Western eyes.

4. Despite Their Intimidating Appearance, Black Great Danes Are Very Social

Great Danes are known for their sociable, friendly natures. They thrive when trained well and respond very positively to firm training methods that apply consistently throughout the process.

Danes are considered gentle giants. They’re moderately playful, affectionate, and good with children – especially if raised alongside them. These dogs get along well enough with everyone in most cases however, some individuals may be aggressive towards other animals they don’t know (or vice versa).

So if you are looking for an all-around great dog, the black Great Dane is a perfect choice. They are loyal, loving, and always up for a good time. If you have the space and can handle this big guy, he will make a great addition to your home.