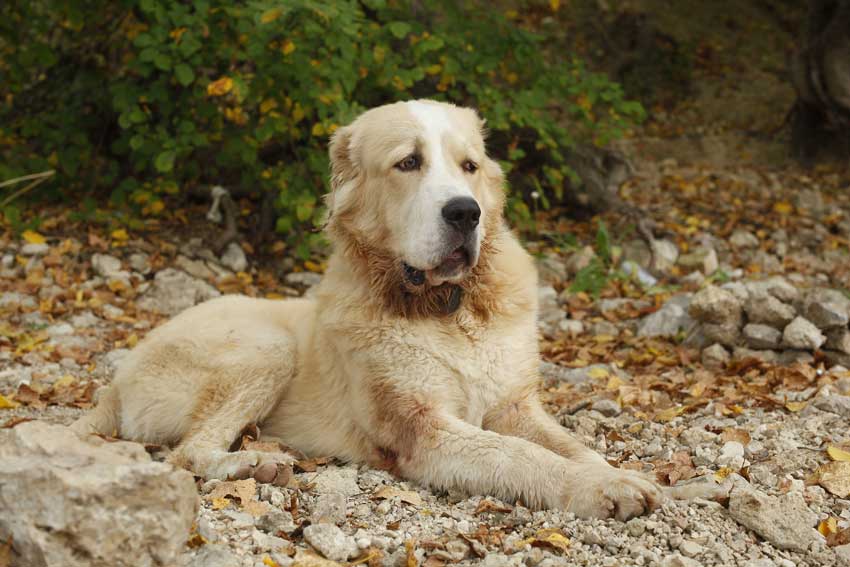 The Central Asian Shepherd Dog is an ancient breed that has been prized by the nomadic people for thousands of years. Historically, this breed was used to defend livestock and fend off predators. However, more recently it has been used by the military, who have capitalized on its impressive strength and intimidating size.

They have large, muscular frames and a thick, heavy coat that offers protection from harsh weather. These dogs have a mild to moderate potential for aggressive behavior, so this not a good dog for a first-time owner. Great care and attention are required to ensure they become well-adjusted to people and other pets.

The Central Asian Shepherd Dog is one of the most ancient breeds of dog still in existence. Originating from rural areas of the Great Steppe of Central Asia, it’s thought that these dogs have existed for over 10,000 years. It’s believed that they are the result of mixing Central Asian guard dogs with Tibetan Mastiffs. However, this is not set in stone.

Nomadic farmers relied on these dogs to protect livestock from wolves, jackals, and even bears. They are often referred to as “wolf-crushers”. The Central Asian Shepherd Dog would spend hours by its flock, on the lookout for anything that resembled a predator. They would patrol the terrain and bark to alert the farmers of potential threats. And if needed, these dogs were known to get physical with any carnivore who approached their flock.

Living on barren land with very cold weather, this dog has developed into a resilient breed. More recently in history, the Central Asian Shepherd Dog was recognized by the Soviet Union for its unique qualities. They were employed in Russia as guard dogs, patrol dogs, and within the military.

The breed was recognized by the United Kennel Club (UKC) in 2001. Today, this breed is used by civilians as both watchdogs and companion animals, though some continue to guard livestock in rural communities. Sadly, they are still known to be used in dog fights in Central Asia.

There is a lot of variance in the breed, but all members do share certain characteristics. The Central Asian Shepherd is large and imposing. The males reach heights of 78 cm and weigh 50-80 kg. The females stand up to 69 cm and weigh 40-65 kg.

They have a wide, bear-like head and the neck is short and thick with a prominent dewlap. Their eyes are dark and deep-set within their head. The ears are small, though they are traditionally cropped. These dogs have muscular bodies that end in a broad rump. They are usually longer than they are tall, and they have a long tail, but it is often cropped.

The Central Asian Shepherd Dog has a double coat, consisting of a dense undercoat and strong outer layer. Some of these dogs possess short coats, while others have longer coats that don’t typically grow and longer than 7 cm. The coat can be a variety of colors, including black, white, grey, brown, and brindle. Most of these dogs have a dark-colored mask on their face.

Central Asian Shepherd Dogs are generally independent, loyal, and strong-willed. Depending on the breed line, some of these dogs can be aggressive. They devote themselves to their owners but tend not to bond with new people or pets. Furthermore, aggression between males is common.

This is not a good breed for a first-time dog owner. Without proper socialization and firm training, they will most likely display aggression to strangers. Remember, these dogs were originally developed to ward off large carnivores, so they possess a defensive stance towards most creatures, including humans.

This breed is not for the average dog owner. Stubborn and determined, this dog marches to the beat of its own drum. They have an alpha-mentality, meaning they often see themselves as “top dog” in the family. An experienced, consistent trainer, using proper positive reinforcement is recommended for training one of these mighty dogs.

The Central Asian Shepherd Dog is an individual thinker. They developed this trait by surviving on the barren mountains of Central Asia. So the breed is intelligent and resourceful. An experienced trainer can use this trait to their advantage.

Despite their large bodies, they usually live a quality life with an average lifespan of 12-14 years. However, the breed is prone to:

This is an orthopedic condition that affects the development of the hip joints. Osteoarthritis naturally follows.

An inherited disease of the elbow joint, that results in chronic osteoarthritis.

This condition can be deadly. When a dog’s stomach expands with food and gas, it can rotate and result in death. Without the right surgery, affected dogs sadly don’t survive.

Central Asian Shepherd Dogs are suited to walk and patrol with limited breaks. To keep the dog satisfied, they need a large fenced-in lawn that they can monitor and manage.

At least one hour of walking a day is recommended. If you fail to meet their energetic quota, they are known to lash out by barking and creating destruction. As with all growing large-breed dogs, juveniles should not be over-exercised. Doing so can result in damage to the joints.

During most months, they require a brushing a few times a week. But during the shedding season, they could ideally use a brushing every day. It is important to introduce grooming requirements early in development so your dog knows when it’s time to tend to hygiene.