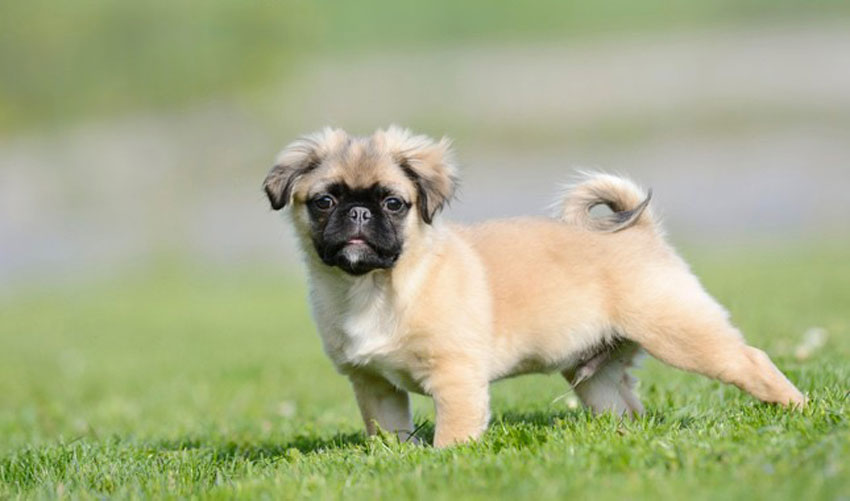 The Chihuahua mixed with pugs is a cross-breed between a Chihuahua and a pug. It is a sturdy breed that has gained popularity over the years and has proved to be an incredible companion. This is an ideal dog for small dog lovers looking for a dog with low maintenance and moderate activity. Chugs are favorable pets for both city residents and suburban homeowners.

Like with many other mixed breed dogs, predicting the physical appearance of a chug is a relatively impossible task. It may resemble a chihuahua or take after the character and physical traits of a pug, or a variation of those. But one common feature you cannot guess wrong is the breed’s size. They are invariably small in stature.

A chug’s looks and temperament vary according to their parent’s gene domination and contribution and can inherit both their parents’ negative and positive attributes. Getting the mix of both breeds is a taste of both worlds. Some owners have reported their chugs to have a snuggly and cuddly personality, while others report a rather sassy and feisty attitude towards strangers from their hybrid.

Either way, plenty of people want to bring a chug home, so here’s everything you need to know.

History of the Chug

The breed’s origin remains a mystery, but their existence can be traced back to the early 2000s, where they became noticeable. According to their ancestry breed history, one can learn and comprehend the heritage of these interesting breeds.

Pugs are ancient breeds that date back to 206 BC. They are classified as an under-toy-group and are said to have originated from Tibet before making an appearance in China. They were royal dogs and are regarded as humorous dogs.

Pugs would later make their way to Europe through trade. Their royalty status did not change as they were adorned in England and most parts of Europe, and after the civil war, they made their way to North America and were registered under the kennel club.

Chihuahuas are also ancient dogs dating back to 300 BC, originally from Mexico. They are categorized under the toy group for their diminutive features. Chihuahuas are thought to have wild dog ancestry and were household dogs domesticated for spiritual guidance. They gained fame after several famous people adopted and domesticated them, creating awareness of the breed.

The chug is the most unpredictable hybrid. The breed is not a pedigree meaning they cannot be classified under the Kennel Club and are usually recognized under American Canine Hybrid Club. Different from other crossbreeds, they have no poodle ancestry in their line.

Incentive programs are initiated by breed clubs to try to combat the inherited disorders in crossbreeds. Breed clubs are coming up with hybrids with the ability to introduce new genetic variations into the gene pool combining it with breed schemes to eradicate health complications caused by overbreeding.

Public awareness of cross-breeds and the importance of screen testing programmers to understand diseases’ development and how to combat it.

Breed Personality/Temperament of the Breed

Both parents of this breed have charming and charismatic personalities; hence the breed without a doubt gets some of these traits passed down to it. According to numerous factors like hereditary aspects, its temperament varies, including genes, the environment, and training. Research links temperament aspects of a chug to the mother.

The breed is likely to have an independent character with a suspicious nature if Chihuahua’s genes are dominant but more goofy and sweet if the pug side takes over. The mixed breed is generally a playful and affectionate dog. This breed is naturally friendly and playful; they are ideal for older family members. However, they are not friendly to kids (especially young kids who mishandle them) and new owners.

It is advisable to start early socializing your chug. They make decent housemates to other pets if trained at an early stage. Taking your pet to social grounds like parks to socialize with other pets and other people can help them develop good socializing skills. If left untrained, they can become very aggressive and feisty to new faces and other house pets.

One of the most fundamental keys to owning a healthy chug is watching its dietary intake and its essential nutritional requirements like food rich in vitamins and fiber. Food rich in fiber is a recommended dietary intake for your chug. This limits their intake, making them eat smaller amounts of food to cut down on the possibility of your dog earning a ton of weight as these breeds are prone to obesity.

Small food intake will ensure your chug remains to its serving size as overfeeding them results in excess weight gain. Also, avoid feeding the breed cheap empty calorie food; this crossbreed requires quality commercial feed formulated for its unique needs. The rule in choosing the best diet for your dog ranges according to different factors like age, size, and activity level.

For a breed of up to 10 lbs, they can take an intake of one cup dry kibble diet or three-quarters of a cup depending on how active the dog is. They require correct protein and energy, giving foods to stay fit and healthy.

These mixed breeds share a syndrome known as brachycephaly. It’s a pathological condition characterized by a flat face that mostly affects dogs with short noses. Therefore, chugs (like pugs) are quite vulnerable to respiratory infection. They tackle the complications by panting and reverse sneezing to regulate their body temperature.

Although mixed breeds are assumed to be resilient and less likely to have congenital health conditions than pure breeds, chug dogs are unfortunately the complete opposite. Coming from two breeds prone to sickness and various health complications’, these attributes have rendered chug dogs susceptible to infection.

Chihuahuas are prone to patellar luxation and heart problems while their counterpart pugs experience difficulty in breathing complications; this explains the breed’s illness susceptibility. Owners are advised to take precautions with their chugs if living in cold areas as the breed struggles with cold temperatures.

Other health risks associated with the breed include;

Here’s what you can expect your pet chug to look like.

The chug coat comes in different colors, and the most common colors of their coat are brown, chocolate or cream, Golden or light brown.

They have a smooth and short coat that sheds fur moderately to heavily depending on the dominant gene. They can also have long fur if a long-haired Chihuahua existed in their lineage.

They have a small rounded face with miniature boxer face comparison. They have huge protruding eyes and around the nose with wrinkled cheeks and dropped ears. However, with dominant Chihuahuas genes, the chug is more likely to have slightly erect ears.

Chugs sizes are a typical medium-sized dog and usually smaller than pugs but larger than Chihuahuas; their size again varies with their ancestral parents. They weigh up to 9 kg with a height of up to 6 to 12 inches.

Chugs possess moderate activity levels and are quite adaptable according to the setting and the environment they grow up in.

This cross-breed does not require long hours of exercise; the 30-minute walk’s daily routine would be as much as necessary. However, if the Chihuahua genes are dominant, your dog could be a hyperactive and playful fella. Exercises are essential in keeping your chug in shape and also improve its mental stability to prevent dogs from acquiring “small dog syndrome” and becoming aggressive.

Chug coats vary depending on the dominant gene of the parents’ breed. Both parents are moderate shedders; hence they require standard maintenance. A full grooming regime is required to maintain this breed, like regular brushing of the coat. This helps rid of dead hair keeping the hair tangle free and also helps reduce the amount of hair the dog sheds around your home.

A frequent bath is a hygienic way to protect your dog from ailments. If your dog has facial wrinkles, you are advised to ensure they are always clean and dry at all times to avoid a condition called skin fold dermatitis. This also applies to the ears, especially those with folded ears.

Fold dermatitis is an infection that usually occurs in the spaces between two parts of folded skin. Warm and moist folds provide an excellent environment for bacterial and yeast growth. Therefore, it is essential to move to regularly check and dry your dog’s nose and ears after every bath.

A malocclusion occurs when there is teeth misalignment, and all pug breeds are prone to the condition. Chugs have overcrowded teeth that trap food particles encouraging bacteria to build up in the gums; hence owners are encouraged to observe dental hygiene with regular brushing of teeth or buy toys that also act as floss.

Training your chug will be a trouble-free procedure as they are smart dogs that learn fast. They are, however, adamant, and science-based training techniques may be required during training. Relationships between humans and dogs are based solely on cooperation and compassion rather than human control over dogs; therefore, owners are encouraged to be patient during training.

Chugs with Chihuahua traits are easier and faster to train compared to the ones with pug temperaments. Pugs exhibit an autonomous personality that makes it hard throughout training; hence, owners are advised to be patient during training and use positive reinforcement techniques. Shouting at your puppy to enhance learning does not help.

Training should encompass fun and short sessions. This is because strenuous activities could lead to breathing complications in the dog. Please take advantage of the dog’s character of pleasing to teach it basic traits. Early training from as early as eight weeks is encouraged.

Is a Chug a Family Dog?

Chihuahua mixed with pugs is ideal for families and apartment residents; they also fit in any setting as they are indoor dogs. They love to snuggle since they prefer a warmer environment and are also good for companionship.

A chug is likely to be smaller in size, depending on its parents’ genetic attributes. The chug is also a hardy breed and is known for its aggressive tendencies; hence owners are advised to train and socialize them at early stages in life.

They are fragile and sensitive; in a family home setting, owners are encouraged to teach their children not to arouse the breed’s aggressive nature. A chug can become hostile if mishandled. Families with young children are discouraged from owning chug dogs.

Chugs have proven to be decent watchdogs for their vigilance and alert tendencies; they bark at strangers and are remarkably territorial.

Reaching out to rescue groups can help you find the dog of your choice. These rescue groups are formed by people and organizations who love dogs and rescue homeless dogs. Talking to an experienced member of the fraternity could guide you into choosing your desired breed.

The internet is another way to find various rescue groups. Research them and narrow your research to the ones near your area. Adopting a puppy may be enticing, but most humanitarian groups caution against seeking puppies; there are plenty of other pups of all breeds that need loving homes.

If you are into a cheerful; and affectionate dog with an adorable demeanor, the chug is the breed for you. It is manageable and easy to take care of with fewer exercise requirements. They are less demanding, and their short coat feature will only require regular brushing to tone down the fur’s shedding.