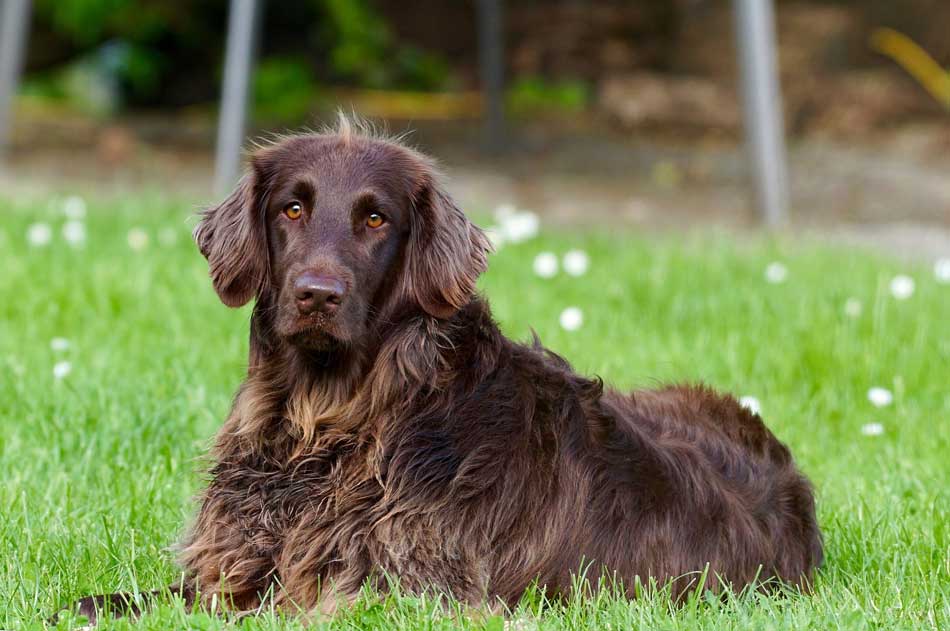 The German Longhaired Pointer is a large dog breed with a lifespan of 12-14 years. They are formidable hunting dogs that have exceptional endurance and agility. They have a somewhat demanding nature for activity, so lots of exercise is required. Without proper muscle exhaustion, they can become irritable and destructive. Due to the nature of this breed, they are not suitable for apartment-style living. The ideal day in the life of this dog has routine outdoor excursions where they are free to run and follow scents.

These dogs emerged in the 19th century as a stubborn, but strong breed. However, the modern-day German Longhaired Pointer is a lovable character who prefers spending time with family over anything else.

This breed has been around for centuries and it has a hunting lineage. Before the invention of firearms, hunters used hawks and falcons to hunt wild game. Pointer-type dogs were used to flush out quarry from the undergrowth and the bird of prey would then swoop down on the game when exposed.

Some dogs developed a pointing behavior. Rather than dash into the bushes at their target, they would stand and point to the prey with their noses. This pointing behavior was a desirable attribute for hunters. Once guns gained popularity and hunting moved from enclosed woodlands to open fields, the pointing behavior became even more beneficial. German Longhaired Pointers would indicate where the quarry was at and as a result, hunters would have a greater chance of a successful hunt.

In the 19th century, firearms peaked in popularity and shooting became a popular past time in Europe. Hunters took great pride in their hunting dogs. A natural interest brewed in breeding the fastest pointers with the best noses. It was at this age that the science of selective breeding gained popularity. Many aristocrats took an interest in science and set out to breed their idea of the perfect hunting dog. Several breeds emerged during this time, each with their own society of aficionados. Among them was the German Longhaired Pointer, which arose in the mid-19th century. Between 1878 and 1879, the breed standard was created at the first dog shows in Frankfurt. Though these dogs were bred based on physical appearance, they didn’t lose their hunting ability. However, it’s noted that their personality has changed from stubborn and impulsive to friendly and gentle.

The German Longhaired Pointer is a beautiful and athletic dog. They are a medium to large breed and have a strong, muscular frame. Adults reach a weight of 27-30 kg. The males tend to be taller with a height range of 60-70 cm, and females are generally 58-66 cm at the withers. This breed has a similar facial structure to spaniels with a high forehead and a triangular-shaped muzzle. Their noses are black and their eyes are brown. They have rounded ears that extend down to the chin. They are deep-chested with a slight abdominal tuck and their limbs are long and muscular.

Their wavy coat is 3-5 cm long on the body. They have feathered hair on the ears, abdomen, tail, and back of the limbs. German Longhaired Pointers have a thick undercoat that sheds seasonally. The coat is usually a solid color, usually brown or dark roan, however, some have white markings on the muzzle, paws, and chest.

German Longhaired Pointers are friendly dogs. Like most working dogs, they have a surplus of energy, thus require daily exercise. The breed is known to cause a little chaos when understimulated, so they shouldn’t be left alone in the house for too long.

They thrive on all terrains and flourish with an outdoor lifestyle. These dogs are clever and have an impressive intelligence. They bond smoothly with their family but don’t enjoy being left alone for long periods of time.

This breed makes for a good family pet and is known for being affectionate with children. They enjoy burning energy by playing games. If you’re looking for a gentle dog to go on outdoor family excursions with, the German Longhaired Pointer is a good dog for you.

The German Longhaired Pointer is highly trainable. In addition to their intelligence, they have plenty of energy and love pleasing their owners. This breed is suitable for agility-based sports and obedience trials. These dogs are not overly headstrong and require a gentle touch when training. They respond well to positive reinforcement.

Like most dogs, it’s best to train German Longhaired Pointers in their puppy phase. A well-trained puppy will be calm and affectionate, but a poorly trained puppy may grow to be difficult to handle. Lots of socialization is recommended to prevent this breed from becoming anxious in their adult years.

German Longhaired Pointers are typically healthy dogs. Currently, there are no known disorders or conditions associated with the breed. However, there is some concern about their susceptibility to ear infections. Since their ears hang down over the ear canal, they are more vulnerable to ear infections. In order to prevent chronic problems, owners need to address the infection while it is mild. For this breed, regular ear inspections should be carried out. Look for wax build-ups, reddening of the skin, or unpleasant smells. This is especially crucial in dogs that like to swim since water enters the ear canals and creates humid conditions in which yeast and bacteria may cause an infection. Fortunately, there is a large array of treatments available for ear infections.

The German Longhaired Pointer requires lots of exercise. On a daily basis, they do best with a minimum of 1-2 hours of running time. Don’t trick yourself into believing that you can get away with simply letting them out into a yard. The quality of the exercise is important and it should include mental stimulation.

Remember, German Longhaired Pointers have hunting play in their DNA. They love following scents and discovering their whereabouts. They have an adventurous mind and will wander from their owners for hundreds of yards on walks. Having a good recall command is key.

German Longhaired Pointers are fairly low maintenance, but they do shed. Weekly brushing is recommended. This will prevent the hair from becoming tangled and matted. Their shedding season(s) is during autumn and spring, and during this time they require daily brushing.

They love spending time rummaging through the undergrowth, so burrs and other plant debris will need to be combed out. Also, don’t forget to check those ears regularly.