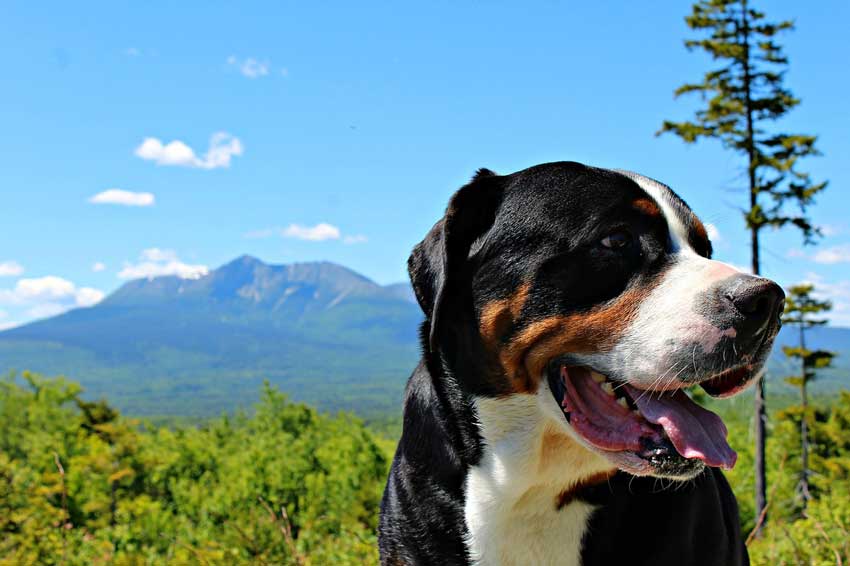 While the Greater Swiss Mountain dogs (often called Swissies for short) are not as well-known as many other breeds, they combine a variety of appealing characteristics that make them great pets and companions.

Inside your home, your Swissy will likely feel at ease with the entire family, including kids, other dogs, and cats. However, behind their joyful personality lies a loyal protector capable of using their large bodies to guard their family — regardless of their own personal safety.

Is the Greater Swiss Mountain Dog the right pet for your family? Here’s a closer look at everything you should know about this breed, including how it looks, how it acts, and what it needs to live a healthy and happy life.

Most experts agree that the first appearance of the Swissy occurred in 58 B.C. when Romans invaded the area of modern-day Switzerland. The legions, led by Julius Cesar, brought in exceptionally large, mastiff-like dogs. This new breed began mating with the local Alpine breeds, resulting in these four new breeds:

Together, these breeds are referred to as the Sennenhund breeds.

The Greater Swiss Mountain Dog is a larger breed with heavy bones and impressive physical strength. In the past, the Swissy was bred as a draft dog to pull heavy carts, a watchdog, a family companion, and a herding dog to help move dairy cattle. The Swiss farmers required a multi-purpose, strong dog who could work on the farm and provide a useful service — and the GSMD delivered.

The breed is an athletic, strong, and alert dog who can easily overpower most other breeds. It’s a confident breed that rarely acts shy. While the dog is physical and athletic, it is also extremely gentle with people – even young children.

The “Almost” Extinction of the Greater Swiss Mountain Dog

After the Industrial Revolution, farmers opted to replace the Greater Swiss Mountain Dog with equipment that was less demanding and more efficient. Because the dogs were so large, they were not generally accepted as house pets. For this reason, the breed’s population began to decline until they were close to extinction!

However, in the 1950s, the breed made their way across the “pond” to the U.S. The American Kennel Club (AKC) officially recognized the breed in 1995. This helped to promote the beginning of breeding, which revitalized the breed and grew their numbers once again.

You can instantly recognize the Greater Swiss Mountain Breed because of the tri-color coat that combines white, tan (or brown), and black. Typically, the dog’s prominent color will be black, which is seen across the back and body, while brown markings are seen on the legs and haunches. White markings usually do not go past the dog’s muzzle, neck, and chest.

Because of the large size of the Swissies, they easily make it into the “giant” breed category. The male of the species can reach up to 28.5 inches tall and may weigh up to 140 pounds. The females are not too far behind. They measure up to 27 inches tall and weigh up to 110 pounds.

Swissies can live between 8 and 11 years. However, they may live slightly longer if you offer sufficient care and a good diet. If you can, it is smart to trace your dog’s biological parents to learn how long they lived. Usually, their pup will not live much longer than this.

It is important to note, the lifespan of your Greater Swiss Mountain Dog may vary from these numbers based on their health and the diet they eat. Be sure to consult with the breeder or a vet if you need help ensuring that your dog remains happy and healthy throughout their life.

While Swissies are a large breed, they maintain a fun and gentle personality throughout their life. However, it is important to understand that they need special training if you want to adopt this breed. Swissies that are not properly trained will act out and on their own. This may even lead to stubborn behavior.

As mentioned above, Swissies once lived on farms and spent their days herding livestock. As a result, today’s generations of the breed have top-notch observation and alertness skills. They’re generally wonderful watchdogs. If your Swissy spots something unusual, they’ll let you know with a loud bark. However, aggressive behavior is not in their character.

If you’re considering adoption, try to get a puppy. Along with being extremely cute, puppies are also easier to train than untrained adult dogs.

Like most other breeds, your Swissy will show off a better temperament if you take time to introduce them – starting at a young age – to new smells, sights, and people.

Diet for Adults and Puppies

Originally, Swissies grew up in the rugged and rough terrains found in the Alpine region. They ate large rations to power them through their demanding workdays. Today, though, your Swissy doesn’t have to put in the same amount of work or activity they did in the past. However, they still have big appetites, which makes them prone to overeating and obesity.

When actively growing, if your dog happens to put on additional pounds, their bones and joints will take on a heavier load, which can quickly become dangerous. Not only will this increase the likelihood of bone fractures, but it can also limit their growth.

The best way to avoid this situation is by becoming familiar with the proper diet for this unique breed.

Your Swissy puppy will grow at a normal rate if you feed them puppy food formulated for large-breed dogs. It is best to continue this diet until your puppy reaches six months old. Some breeders will extend this routine until the puppy reaches 12 months of age, which will ensure full and healthy bone growth.

It’s a good idea to ration your puppy’s servings of food. However, the exact amount is dependent on their age. As a general rule, you should give your puppy one cup of food, per day, for each month of their age. Divide that amount over three different meals.

Your adult Swissy should have no more than six cups of food each day. You can choose to divide this serving size over two or even three meals a day. It is best to base the amounts on your dog’s activity pattern.

Using a large-breed formula is best. Just ensure you find food with a protein count of 22% to 24% and fat content between 12% to 15%. With these percentages, you can feel confident your dog will achieve higher energy levels without gaining extra weight.

Many dog owners like to “treat” their pup with “people food” from time to time. While doing so may seem harmless, you’re exposing your dog to serious health risks. Avoid giving your dog any of the following, even in small quantities.

When Do You Give Your Dog Shots?

Your dog’s specific shot schedule is determined by your vet. Like all dogs, they’ll receive four rounds of DAP shots. DAP stands for Distemper, Adenovirus/Hepatitis, and Parvovirus. Shots are given:

Additionally, your dog will get a rabies shot around their first birthday, with boosters typically every three years. Your vet might also want to give them what are called “non-core” vaccines to protect them against Lyme disease, Bordetella, canine influenza, and other potential medical maladies.

The Greater Swiss Mountain Dog and Your Family

While this is a larger breed, the Swissies make excellent family pets and tend to thrive in these environments. Usually, the dog will love and protect your children as if they were part of their “herd.”

The breed’s muscular build does pose some concern. While Swissies usually do not mean to cause harm, they may knock over babies or small children. With that in mind, it is best to monitor your pup and child while they are together to ensure no issues arise.

Also, children should be taught the right way to treat their dogs. This quick-witted, brawny dog will not tolerate aggressive play, tail or ear pulling, sleep disruptions, and more.

How Well Does This Breed Get Along With Other Pets?

Before arriving in the US, the Swissies’ had a strong “prey drive” that made them useful for herding livestock. However, after the 1950s, U.S. breeders worked to eliminate the trait through selective breeding.

That doesn’t mean the prey drive is gone entirely. Some individual dogs may try to herd smaller pets around the household. While many Swissies welcome other pets into the herd, so to speak, you do want to watch out for any potential bullying behavior.

If you want to ensure this is something you can avoid, be sure to get your dog from a certified breeder. Also, take time to meet the pup’s parents to determine how the dog’s temperament will be as it grows and develops.

Remember, the Greater Swiss Mountain Dog originates from the freezing mountains and rough ice-laden terrains found in Switzerland. As a result, Swissies developed a rather thick, double coat that protects them from the elements and harsh winters. If you live in an area where snow is common, your pup will love it.

However, in the summer, you should keep your Swissy inside as much as possible. Keep fans and air conditioners running on hot days. When the temperatures are high, make sure to limit your dog’s exercise and activity, as too much can lead to heatstroke. If you must take your dog outside, be sure to stay in the shade and go out early in the morning or later in the evening when temperatures are mild.

Even though the Greater Swiss Mountain Dog has a double coat, they don’t shed often. In fact, shedding occurs only about twice per year. When shedding is happening, make sure you brush their coats a few times a week. It can also be helpful to bathe them once a month or so. When the Swissy is not shedding, you can reduce your grooming routine since most Swisses can keep up with their own hygiene (for the most part).

The Greater Swiss Mountain Dog breed received its name because of how it compares physically with the Sennenhund cousins. The unique personalities of this breed are what amaze most breeders and people who encounter them. While the dogs have beefy bodies, they display significant affection for all people – both old and young.

Remember, ancestors to the Swissies would roam through endless mountainous terrains in Switzerland to complete farming chores and herd livestock. Today, the dogs have a strong urge to exercise, making them a less-than-ideal choice for apartments and other small living situations. However, if you have a large yard, they’ll thrive.

If you’re looking for a dog that’s easy to train and will protect you and your family, look no further than the Greater Swiss Mountain Dog. They’re big dogs with even bigger hearts!