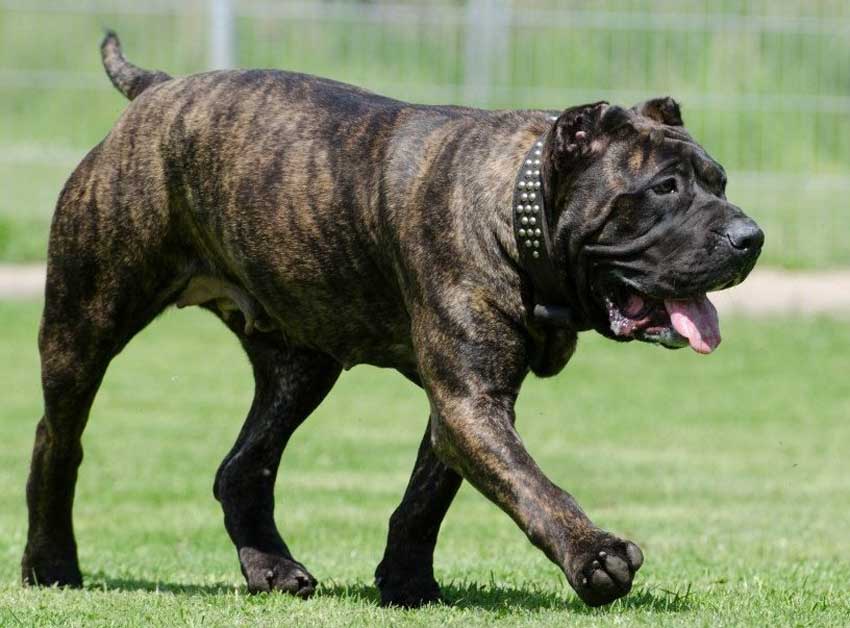 Presa Canario is a robust dog breed with a firm and vigilant stance; they’re very devoted dogs who, when well-trained, will remain obedient and highly social. However, because they’re natural guard dogs, Presas are suspicious of strangers and can act aggressively.

If you’ve ever considered adopting a Presa Canario or are merely curious, you’ve come to the right place. We share everything you need to know about this mega breed.

It’s thought that the Perro de Presa Canario dates back to the 15th or 16th centuries on the Canary Islands.

Although not exactly sure, experts believe the breed descended from the Iberian Presa—a Mastiff-type breed—and the Alanos, which includes different types of Bulldogs.

However, when the British came to the islands, they brought other types of Mastiffs and Bulldogs, which further contributed to the Presa’s bloodline. One of the last additions to the breed was the Bardino Majorero, a sheepdog known for its intelligence, courage, guard instincts, and impressive teeth.

Presa Canarios were guard dogs on farms in their early days, where they helped wrangle cattle and hogs while chasing away predators, such as stray or wild dogs.

Dog Fighting and Near Extinction

Because of their sheer power and impressive build, they became popular fighting dogs. Fortunately, these events became prohibited around the 1940s, although they did continue underground for another ten years.

As dogfighting on the islands ended, and with the introduction of other guard dog breeds like the Doberman Pinscher, the number of Presas dropped significantly. Luckily, small numbers were relegated to farmers and herdsmen to use as their guard dogs before the breed died out.

However, it wasn’t until the early 1970s where the reconstruction of this mighty breed began. Reputable breeders began reincarnating the nearly extinct Presa, but now with a more massive, vigorous, rustic, and intense makeover.

They quickly became known for their robust build yet calm and confident temperaments—dogs that would power through anything to defend what they considered dear.

The breed’s full recovery didn’t start until 1982, when a few breeders from the Tenerife island developed an association devoted to the dogs.

In 1996, the Presa Canario became a part of the American Kennel Club’s Foundation Stock Service. And in 2003, it became a recognized breed among the United Kennel Club.

The Perro de Presa Canario is infamous for its intimidating nature and potential to be aggressive. Because of this, you must begin socializing and proper training from the puppy stage, but we’ll expand on that further below.

Still, the breed is true to its roots of being a loyal partner who can get defensive in certain situations. Presas make excellent guard dogs since they’re highly suspicious of strangers and protective of their territory and people.

They have a deep, powerful bark that they use to ward away threats. However, they won’t hesitate to get violent should they sense danger.

Due to their confidence, Presa Canarios are generally strong-willed and prefer being independent, i.e., no other dogs allowed. Many discourage Presas owners from adopting or acquiring other dogs and pets, especially with different dominant kinds or small toy breeds.

However, if raised with other pets and taught how to share their space, your Presa could get along with other animals.

Another trait of the Presa Canarios is their active nature; they thrive in homes where they get plenty of playtime and activity. Despite their size, they’re fantastic dogs for running with, as long as you give them proper leash training.

However, with this breed, you should never tie or lock them up, giving them little to no attention. Not only is this cruel, but it will most likely give way to their aggressive nature, which could lead to disaster.

Instead, show them love; it’s the type of breed that will snuggle with you on the couch after a long day.

The Presa Canario is large and impressive; its body is strong and exceptionally well-muscled. Still, this breed’s appearance is very distinctive, especially their heads.

They have strikingly large, rectangular-shaped heads that sit higher over the ground than their backs, giving their spines a sort of swayed appearance. Their jaws are powerful, and they have oval, deep dark eyes.

Most Presas has cropped ears; this was something early breeders did to prevent excessive trauma during dog fights or when wrangling cattle, and it has followed the breed to this day. The ears also contribute to their overall menace appearance. However, in their natural state, they hang down the sides and are of moderate size.

The tail should always be shorter than their body, and the rump should sit higher than their back. Moreover, their tail is thick and tapers to a point.

Presa males are large and reach between 24 to 26 inches, weighing anywhere from 110 to 130 pounds, although some weigh more. Females are slightly smaller, measuring between 22 to 24 inches with weights from 83 to 110 pounds.

Their coats are short and coarse, and their muzzle is generally darker than the rest of the body, if not completely black. Some have white fur markings across their body, which is the only markings allowed for it to be considered a true Presa Canario.

If you’re looking for a breed requiring very little training, the Presa isn’t for you. This dog needs an owner who has experience with similar temperaments to ensure the best outcome.

Regardless of how much experience you have, training a Perro de Presa Canario requires commitment and patience. During training, you should always assert dominance with zero tolerance for bad behavior.

Obedience training should start from the puppy stage and continue for life. It would help if you only acquired a Presa from a breeder who has a pleasant, calm personality and raised the puppies in social conditions.

Training should start the day you bring your Presa puppy home while they’re still a manageable size. An excellent training technique for this breed is a “nothing-in-life-is-free” approach, where they have to work for everything, like meals, treats, and toys, by performing different commands.

If possible, bring your pup to puppy kindergarten where they can learn to be around other dogs and people. After kindergarten, take them to obedience training with a trainer who has experience with this breed.

Frequent socialization is crucial early on. You need to get your puppy used to different household sights and sounds, people, and other pets if you have.

A great idea is to bring them to visit your neighbors and friends, as well as plenty of outings. Socializing will get them used to having other people around and understanding the difference between regular interactions and threats.

Although, you should still keep in mind that even with lots of socializing from a young age, your dog can be hostile towards strangers. Fortunately, you can keep most of their aggressiveness at bay by keeping them active and minimizing boredom.

However, even from a young age, you should discourage their natural prey drive. Presa dogs are prone to chase after and sometimes kill small animals, like cats and other dogs, which would make you very unpopular in the neighborhood. We highly recommend getting a fence that’s at least 6 feet high to prevent your pup from escaping.

Another reason why you should minimize boredom is that Presa puppies are notorious chewers. When left to it, they can wreak havoc at home. Fortunately, once they reach a certain age and maturity, this behavior dulls out.

Although you need to assert your dominance in the home, you should never expose your Presa to forceful or punishment-based training. Doing this leads to resentment and hostile nature, which could end in an attack.

Instead, be consistent at rewarding their good behavior with praise and treats.

A Presa Canario isn’t the best dog to have around children, especially if it wasn’t used to it from a young age.

If you have kids and want to adopt a Presa, the best way to go about it is to have your kids interact with the puppy as much as possible. Let them feed him, groom, and play with him so that the puppy understands they’re part of the family and no threat.

It would help if you also encouraged neighboring kids to play with the puppy, allowing it to get used to little ones. As long as you follow through with proper training and supervision, a Presa will thrive in a family environment.

Presa Canarios have a lifespan between nine and 12 years. However, during that time, they’re prone to specific health issues, including:

Gastric Dilatation and Volvulus (GDV) is a common health issue seen in large, deep-chested dogs, like the Presa, and it’s essentially life-threatening bloating.

In the early stage, GDV causes the stomach to fill with gas, triggering gastric dilatation or bloat. However, when it progresses into a volvulus, the bloated, gas-filled stomach twists upon itself, blocking both the entrance and exit. Moreover, this quickly becomes a life-threatening emergency, requiring surgery.

Vets are unsure of the exact cause but suggest it might occur when large dogs eat and drink rapidly, followed by vigorous activity. It would help if you watched out for sudden bloating, panting, and drooling.

Presa Canarios are prone to developing life-limiting skeletal conditions such as hip and elbow dysplasia. This condition is where the ball and socket in the hip or elbow don’t fit or grow properly, so instead, they rub and grind, resulting in deterioration and eventual loss of function.

These ailments are common in large and giant breeds, and they usually occur due to excessive or improper exercise at a young age. A well-balanced diet can help to prevent such developmental abnormalities.

Dilated cardiomyopathy (DCM) is when the heart’s chambers expand excessively to a point where they can’t contract properly. This condition is common in middle-aged to older Presas. Fortunately, it’s manageable with early detection and cardiac medication.

Heartworm is a common affliction seen in Perro de Presa Canario. Although not exactly sure, it might be because the dogs spend a lot of time outdoors.

Previously, the affected regions were limited to warmer countries and regions; however, cases now occur all over the US, including up north. Fortunately, you can prevent it with routine antiparasitic therapy.

Your Presa will do well on any high-quality dog food, whether it’s commercially produced or made at home with your vet’s approval. However, the diet should be appropriate for your dog’s age, and you should watch the calories as these pups are prone to becoming overweight.

Presas aren’t high maintenance dogs when it comes to grooming. Because of their short, flat, single coats, you only need to brush them once a week to remove dead hair and keep the skin healthy.

Bathing should also be in your cleaning regimen but limit it to the times where they’re filthy. It would be best if you still got them accustomed to tasks such as grooming, bathing, and claw clipping from an early age due to their defensive nature.

Presas don’t shed a lot; they shed seasonally in the fall and spring, so during those seasons, brush them more frequently to remove dead hair. You can also give them a warm bath and use a hairdryer on a low setting to get rid of dead hair more efficiently.

These dogs also don’t drool as much as other Mastiff-type dogs. However, you will see some drooling after eating and drinking or in hot weather. To avoid drool on your clothing and furniture, use a soft cloth to wipe their mouth occasionally.

Perro de Presa Canario is a Mastiff-type dog originating from the Canary Islands. This robust dog is highly intelligent and loyal to its owners, but it requires vigilant training to deter its often aggressive nature.

With training, socialization, and a proper high-quality diet, a Presa can thrive in any environment.