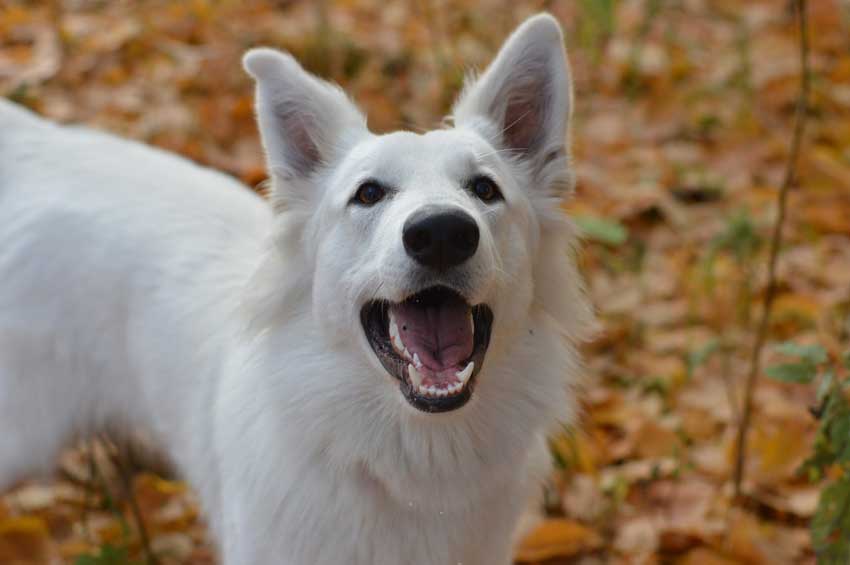 Considering that people have been breeding, training, and owning dogs for thousands of years, it’s safe to say that the White Swiss Shepherd is still considered a fairly new breed on the scene — unless you’re counting in dog years.

Only just recognized in the last 30 years, many don’t know much about this powerful and elegant dog. We’re here to change that, offering a bit of history on the White Swiss Shepherd along with some guidance for new or potential owners.

Without further introduction, let’s take a closer look at this smart, loyal pet.

Though the specific dates are arguable, we can all agree that the White Swiss Shepherd has the same origins as the class German Shepherd we all know and love. The German Shepherd debuted, as its name suggests, in Germany back in the 1800s.

From there, the German Shepherd went through various stages of breeding — mainly as a herding dog working hard in the fields, remaining loyal to his master.

It wasn’t until the 1930s that the White Swiss Shepherd found its initial home in Switzerland. With a lineage tracing back to both the German Shepherd and the American White Shepherd, this animal was quickly recognized across Europe.

German Shepherds of all kinds were widely utilized in the German military and were developed by Captain Von Stephanitz.

Of course, following World War II’s closure, there wasn’t a large need for specially trained and bred dogs. In fact, the white-colored German Shepherds were deemed unfit for military service, as their temperament was a bit milder than the average German Shepherd.

Following the war, many dog breeds dwindled in numbers — a lot of them nearly becoming extinct. To save the breed’s bloodline, several were shipped overseas to the United States and Canada. Breeders in these areas were more than happy to take them, and the White Swiss Shepherd started to become more popular.

Switzerland didn’t officially recognize the breed itself until 1991. About 20 years down the line, the FCI also recognized the breed. It was around this time. Finally, in 2017, this Shepherd was granted pedigree status by the UK Kennel Club.

This breed is not yet recognized as an independent dog type by the American Kennel Club.

You may have guessed by the name, but the White Swiss Shepherd is characterized first and foremost by its white coat. Like German Shepherds, its fur is a thick double coat ranging from medium to long in length.

The physical makeup of this pup’s body is very similar to the German Shepherd as well. It is a significantly strong and powerful dog with a long, muscular body. It can be anywhere from 21 to 26 inches tall, and as an adult, will weigh between 55 and 88 pounds.

Again, the German Shepherd’s Swiss counterpart has the same kind of ears, which are pointed and erect. Their firm ear shape points straight up, giving its head an appearance similar to a wolf.

Most dog’s in this breed family have the same brown, almond-shaped eyes. Their snout is long and thin with a black nose that stands distinguished among its white fur. 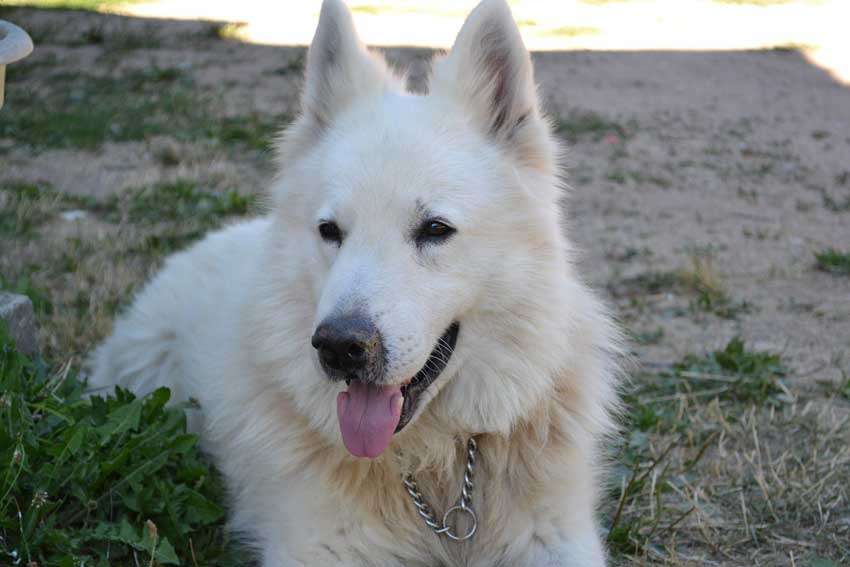 You can expect your White Swiss Shepherd’s temperament to be extremely similar to a German Shepherd’s. This breed is highly intelligent, making training a fairly quick ordeal. Not only are they smart, but they love to learn new things. Once you have earned the respect of this kind of dog, they’re willing and eager to listen to you.

Of course, with respect comes a brand new shadow. Swiss Shepherds are incredibly loyal, and they become their owner’s best friend. In fact, you shouldn’t be surprised if you find your White Shepherd following you just about everywhere.

This trait is endearing, for sure, but it can cause issues with separation anxiety. That, combined with their high energy levels, can lead to some sticky situations.

The good news is that the Swiss iteration of the Shepherd family tends to have a temperament that’s a bit milder than the German relative. While on the mellower side of this range, they are still super protective of their family.

And speaking of family, the White Swiss Shepherd adores children. They are very patient and protective and will guard your children like their own. They also love to play with kids — often more than they like to play with other dogs.

Given their large size, it’s possible that your white fluffball can become a little over-excited playing with small children and can accidentally knock them over. It’s harmless fun — just make sure you keep an eye on playtime.

Your White Swiss Shepherd will be a happy, loyal, and devoted member of your family. Just be sure to give them lots of attention, training, and exercise, or they can quickly become destructive and act out.

As we’ve already mentioned, the White Swiss Shepherd is an extremely intelligent creature who has a strong love of learning — especially if it means spending more time with you, the owner. They are good listeners who pick up on even the smallest things, which can be both good and bad.

The good news is that they will take quickly to simple commands. The bad news is that they can pick up bad habits fast too. So, if your newly trained pup spends time with another dog, don’t be surprised if he starts to bark, jump, etc.

Speaking of other pups, early socialization is a key component to training your White Swiss Shepherd. These dogs are naturally suspicious of other people, so they can become skittish and nervous around newcomers.

The best way to combat this is to bring them around other people as soon as possible. This includes bringing friends and family to your house, as well as taking your pup on walks to new places, dog parks, and other homes.

By giving them a diverse range of exposure, you can help support a well-rounded personality and teach your dog how to approach new people.

When it comes to training in general, your white Shepherd will respond positively to treats and compliments. These dogs have a strong sense of emotions, and they often recognize good treatment instead of scolding and yelling. Because of this sensitivity, you will get more out of them when you reinforce good behavior and praise positive habits, rather than yelling at them for bad things.

Just be careful — your Shepherd can quickly become a spoiled dog and might grow to expect treats. Be firm to ensure their character develops properly.

This breed, along with others in the Shepherd family, is prone to some serious health issues. For this reason, it’s absolutely critical that its breeder gives you a full record of their parents’ medical history.

A few of the potential health problems you might encounter include:

You may also find that your dog struggles with general joint issues as they age, along with skin allergies and some common food intolerances. Your vet can help you sort out issues concerning the best diet and products to avoid.

Consistent and regular check-ups at the vet can help combat these issues, as well as catching them early for the best possible treatment. It’s also extremely beneficial to feed your dog high-quality food and give them the exercise and activity that they need. 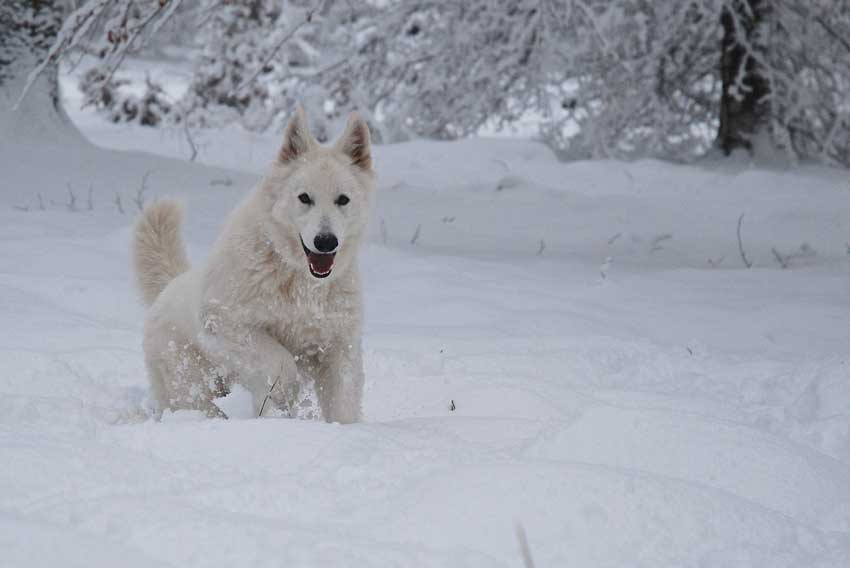 Caring for any kind of dog goes beyond making sure there are food and water in their bowls. Exercise is a critical component to ensuring your dog is happy and healthy.

The White Swiss Shepherd is often described as active and energetic. After all, their history as working dogs has always kept their lineage on the move. Their ancestors worked all day long herding sheep, and that temperament and attitude have not left them even though they’re now a household pet.

In order to keep your dog happy and healthy, you need to make sure they’re getting plenty of exercise and stimulation. We recommend giving them at least one or two hours of moderate activity daily.

Your white Shepherd will love any kind of physical activity that you can include them in. So, if you like to hike, bring your dog along. If you have a lake near your house that’s safe for swimming, they will love that too. Bonus points if you’re a runner because they will gladly come along. In that case, you’re killing two birds with one stone.

Likewise, having young children who also need to let some energy loose is often helpful as well. If you can send your kids in the backyard with your dog for an hour to play every day, you will be in good shape.

Finally, especially in the early years, make sure to spend plenty of your exercise time in training. Training your dog will not only stimulate them physically but mentally as well. This is critical because if your Shepherd gets bored or feels neglected, they will start to take it out on your stuff — your carpets, furniture, shoes — anything they can get ahold of to get your attention and work out their frustration.

Dogs with double coats require a significant amount of grooming to keep their fur healthy — and to keep your home clean. White Swiss Shepherds shed throughout the whole year, but they shed twice a year heavily.

Regardless, it’s important that you have a high-quality brush along with a pet-specific vacuum.

In order to keep your dog’s coat free of tangles, knots, and mats, you should brush through their entire coat at least three times a week. We recommend more if you have the time. Doing so will keep the mats away, and your dog’s fur will look and feel great.

We also recommend brushing your Shepherd’s teeth a few times a week as well. This grooming chore is one that pet owners often neglect, but it’s crucial for preventing bacteria buildup. It also freshens bad doggy breath, which none of us want in our face.

Regularly clipping your dog’s nails will prevent them from cracking or breaking, which can cause them to bleed and even get infections. It will also keep them more comfortable and will minimize accidental scratches on your and your family.

To wrap things up, let’s take a look at a few fun and interesting facts about the White Swiss Shepherd.

Many people have a budget when it comes to getting a new family pet, so it’s important to note the high price range that this breed falls into. The Swiss Shepherd can cost as much as $1,300 when sold as a purebred.

Due to the nature of their health risks, you should also budget for potential vet appointments and treatments. Their health issues can cost a lot of extra money down the line, so you need to be prepared for that.

This shouldn’t come as a huge surprise, considering the high levels of loyalty that this white Shepherd possesses, but these dogs make superb watchdogs. You can always count on them to protect your family, and there’s a good chance they’ll take the lead should your home ever encounter an intruder.

Because the White Swiss Shepherd comes from a background in herding, they may try to act dominant towards other dogs. This is something you should keep an eye out for, but not cause for too much concern; most of the time, this breed is simply uninterested in other dogs.

However, this trait makes these dogs excellent choices for impressive people-oriented careers, including service and competition settings.