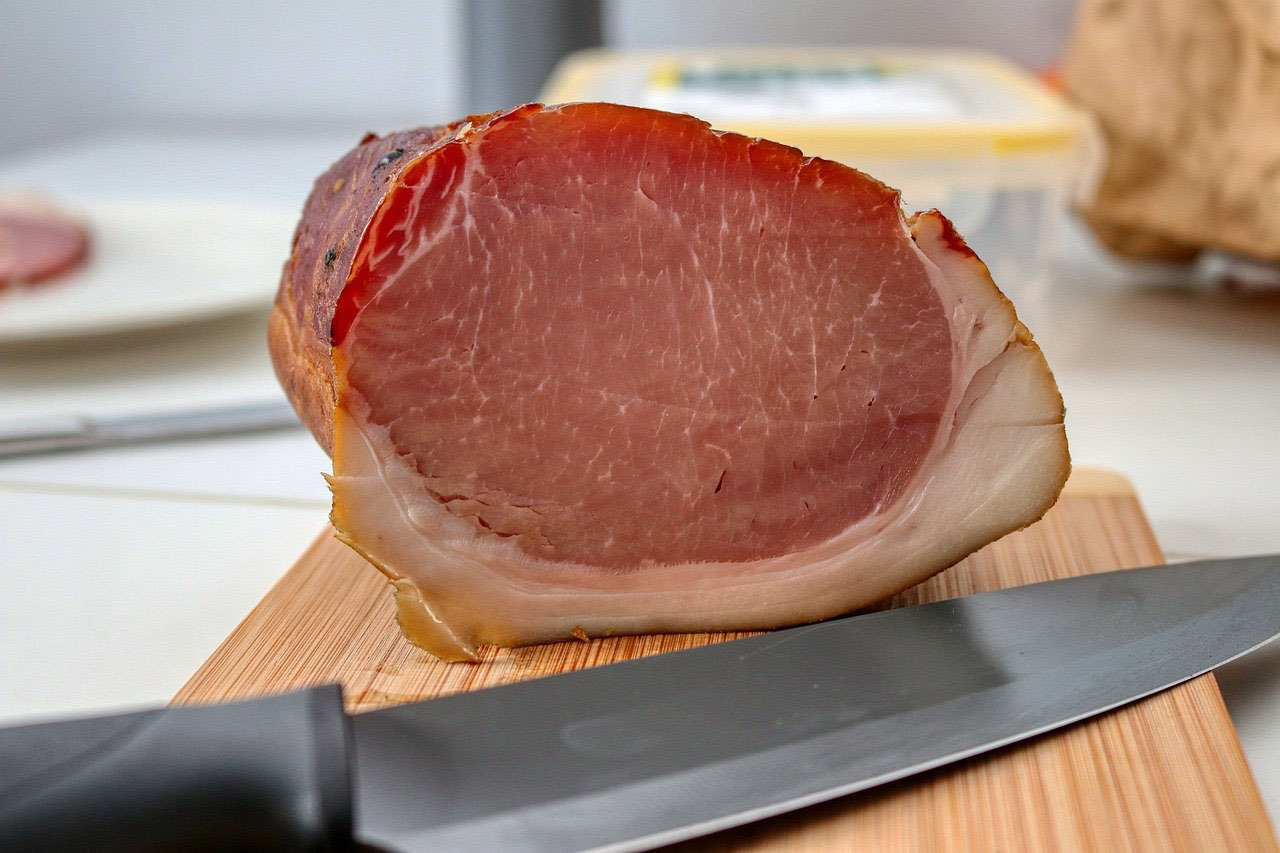 Ever since mankind first tamed canines, it became our responsibility to keep them well-fed and healthy. While this caretaker relationship hasn’t changed since then, what has changed is the types of food available to share.

You may not often be asking yourself, “can dogs eat ham?” It seemdinners completely innocent to toss your dog a spare piece of ham while putting together your sandwich for lunch or sliding a slice of ham under the table during Christmas dinner, but this isn’t always good or healthy for your pup. In some cases, it can even cause severe health issues, so it’s best to be cautious.

Ham, in particular, is a bit of a gray area. It’s protein, so usually, a dog should be able to enjoy it as a treat every now and again. Humans have started using preservatives and sometimes excessive sodium with ham, and dogs can’t handle those ingredients.

Most people know that ham comes from pigs, but if you buy it from a grocery store or even a local butcher, it can come with several hidden ingredients. These additions aren’t great for people, but they are even worse for your pet. If you’re starting to wonder, “can dogs eat ham?” read on.

These are the main ingredients of ham and what makes it a potential tasty treat for your dog. The main issue that comes into play with the protein and fat in ham is the ratio between the two. Too much fat intake can cause digestive issues or even make your dog sick.

Pigs are notorious for being fat, and the meat that comes from them is consistently high in it. While dogs need some fat in their diet, the amount that comes with ham or bacon is too high for what they need. Most dog foods have around 15% fat, while ham far exceeds that.

Too much fat intake can lead to pancreatitis and several digestive issues. If your dog also happens to be overweight or chunky, the extra fat will do them no favors.

But, can dogs eat deli ham? Compared to other meats, packaged and sliced ham is incredibly high in sodium. This is mostly since salt is used to both cure the ham as well as flavor it. These high sodium levels aren’t great for humans but can have much more severe effects on a dog if too much is consumed.

Salt can be toxic to some dogs and can lead to numerous health issues. While many of these issues may end up leading to temporary discomfort, there’s a chance of even more severe reactions.

While kidney damage, seizures, coma, and death are all some of the more extreme reactions, the possibility of them occurring is very real. Your dog will typically be safe as long as the portion of ham given to them is small, but if your dog is sensitive to sodium, it can lead to something far worse.

The nitrates and nitrites found in ham are also unhealthy for your pup. While they are natural and help reduce bacteria growth, they only add to the already high amount of sodium in ham. These nitrates aren’t so bad on other meats, but with ham, it’s just icing on top of the cake.

It is well known that dogs love chewing on bones, but can dogs eat a ham bone? It may seem convenient that your Christmas ham has a bone inside that you can give to your dog as a gift, but you should absolutely never do this. Consider some holiday alternatives instead. That ham bone could quite easily be the worst treat you can ever give your dog.

The ham bone is a bit less dangerous if pulled out before cooking, but not by much. It can contain harmful bacteria in quantities large enough to make your dog severely ill. Getting your pup a bone from a pet store would be a far nicer gift.

Normal dog treat bones are made to avoid this potentially fatal splintering effect. It’s best to just avoid the potential mess entirely and throw away the ham bone at some point during the cooking process.

While ham comes with some risks, it can be okay very rarely as a treat. Other types of meat that we normally eat can be safe for dogs to consume as well, so there are several alternatives. Giving your dog bits of these meats as a treat should pose no health concerns:

Any of these options will make great treats for your dog. Just do your best to avoid any fatty portions or cuts, as dogs don’t need a high amount of fat in their diet. The protein is what is good for them.

Also, make sure that the meat is cooked thoroughly before giving any to your pet. Raw meat can be potentially dangerous for you and your pet, especially if that meat was originally intended for human consumption.

It may be tempting to toss your dog a scrap of ham, but it’s best to avoid this until you consult with a veterinarian. Can dogs eat ham? Ham just tends to be too high in sodium and fat to make for a very good treat option for most dogs.

Never give your dog a ham bone, cooked or otherwise. The potential for sickness or severe injury is too great, and you shouldn’t take that risk. Err on the side of caution and give your pup one of the meat alternatives if you want to treat them.

Can Dogs Eat Truffles? [Yes and No]

Can dogs eat truffles? This is a question that many dog owners ask at some…

The Dos and Don’ts of Feeding Your Pet

Dogs Eating Peaches: All You Need to Know In 2022

There's nothing that beats sitting down with some ripe, juicy peaches in the middle of…