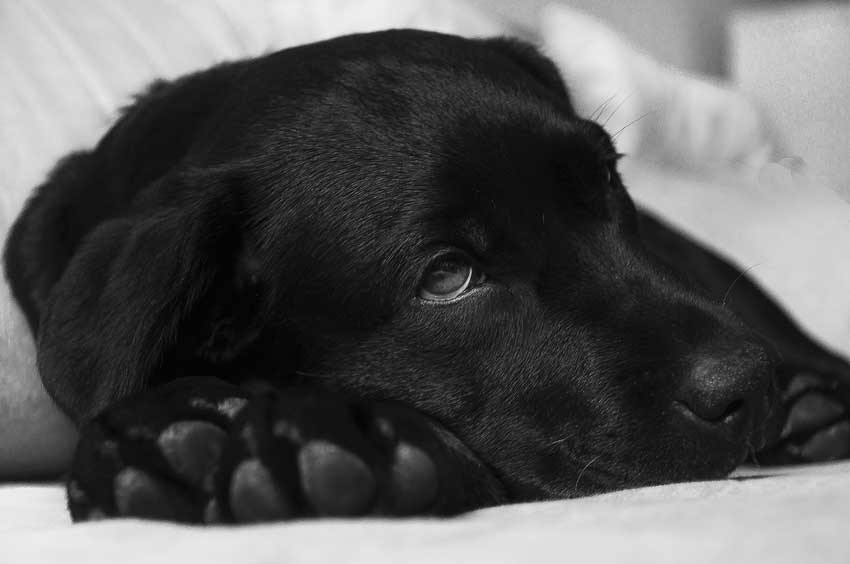 It is a common question among dog owners: “Can my dog get the flu?” While there is such a thing as the canine flu, most people are likely referring to a dog contracting a strand of influenza, which affects humans. In this case, it is worth noting that your furry friend has nothing to worry about from cuddling you while you are recovering from the flu at home.

However, there are several nuances pet owners likely would want to keep in mind concerning their dogs, influenza, and other illnesses with similar symptoms. So with flu season upon us, and with sickness very much in the news all around us as it has been for months, it bears looking into how our pups can and do get sick and what role we play in it.

Can Dogs Get The Flu From Humans?

To understand why humans cannot pass on their influenza to dogs it is essential to understand how illnesses work between different animal species. While there are several examples of other mammals transferring diseases to humans, dogs are not one of them. Most conditions people get from animals are from ingestion as food or from the animal biting the person.

This is also speaking broadly about all illnesses and diseases, of which influenza is only one. Therefore, what is true for some diseases is not necessarily true of the flu. Dogs are considered “man’s best friend” for a reason; humans and dogs have coexisted for an extremely long time.

At this point, we are pretty used to each other and no longer can get each other sick to any significant degree. Where the flu is concerned, specifically, Healthline states that while dogs can technically carry human strains of the flu virus, they cannot become ill from it. There are also only a handful of incidents of this happening at all.

Contrarily, humans cannot carry Canine Influenza at all, or there are no accounts of humans getting sick with it. With the illness’s strains being as different as they are, even if a human were to contract Canine Influenza, it would not affect them. So can dogs get “the flu,” as we refer to it? No, not in any meaningful way.

Dogs have their own strand of the flu. There are two separate strands of influenza that affect dogs in slightly different ways. In this way, yes, dogs can get the flu. The symptoms are similar to a human strain of the flu. According to PetMD, it results in a lot of coughing, sneezing, red eyes, and runny nose. Like human flu strains, canine influenza is passed far more often and has far worse symptoms in dogs with lower immune systems.

Healthy dogs are at lower risk, as are dogs with less contact with other dogs, but it can happen. The Center for Disease Control (CDC) notes that dogs in their kennel for long periods are at much higher risk, according to their research into the virus. These risks are even more prevalent at professional kenneling facilities where they are in constant proximity to many other dogs and are staying in the same spaces that previous dogs stayed in before them.

The CDC also further emphasizes that there are no cases of Canine Influenza have been recorded in humans. They also state that Canine Influenza itself jumped from horses to dogs, though this is only speculation.

Knowing what symptoms to look for is crucial to get your pup the care they need.

Red or runny eyes are likely to be the first thing that most dog owners notice, along with a general loss of appetite. Not all dogs will show every sign of the illness. Some breeds may not show runny eyes or nose due to the breed’s specifics, such as a bulldog or pug.

This may also affect how their owner reacts to hearing their dog sneeze more often. In these cases, coughing is by far the clearest indicator that something may be wrong and that a vet trip may need to happen in the near future.

Both strains of Canine Influenza are treatable and are usually nonfatal in otherwise healthy dogs. The virus can also be prevented to a certain degree; healthy circulation of air is important, as is exercise and proper hygiene for all dogs. Even knowing this, it is important to remember that all dogs are susceptible to Canine Influenza without proper immunizations.

Luckily, a vaccine for Canine Influenza is available in the United States as well as many other places around the world. The CDC recommends having pets immunized by their veterinarian at annual checkups or as needed. Both strands of Canine Influenza are preventable with a healthy lifestyle. It is also recommended that a dog owner call their vet any time their dog exhibits symptoms such as coughing or excessive sneezing.

After all, anyone who has had the human strand of the flu will know how unpleasant it is and will want to prevent their dog from having to go through such a thing any longer than is needed. As it stands, the symptoms on their own can run through the dog’s system in between 10 and 30 days.

Cough suppressants and other medicine may be prescribed to certain dogs as needed to combat these specific symptoms in severe cases. This can also be done if the Canine Flu causes another bacterial infection or something of that nature. In short, there is very little chance of them dying regardless, but vets can make sure that the risk is as low as it can possibly be.

Pet insurance typically costs between $38 to $70 in the US each month and can cover up to 90% of a pet’s medical bills under some plans. Money.com has a great article on the best insurance plans, as well as some of the fine print to watch out for and whether or not pet insurance is even right for you at all!

So, can dogs get the flu? The answer is could be both yes and no. “The Flu,” as people often refer to it, is specific to humans and does not show symptoms in dogs. However, dogs have their own variant of the flu virus, which they very much can get but is very seldom fatal and cannot be contracted by humans.

If you're a dog owner in Houston, chances are you've dealt with pet odor at…