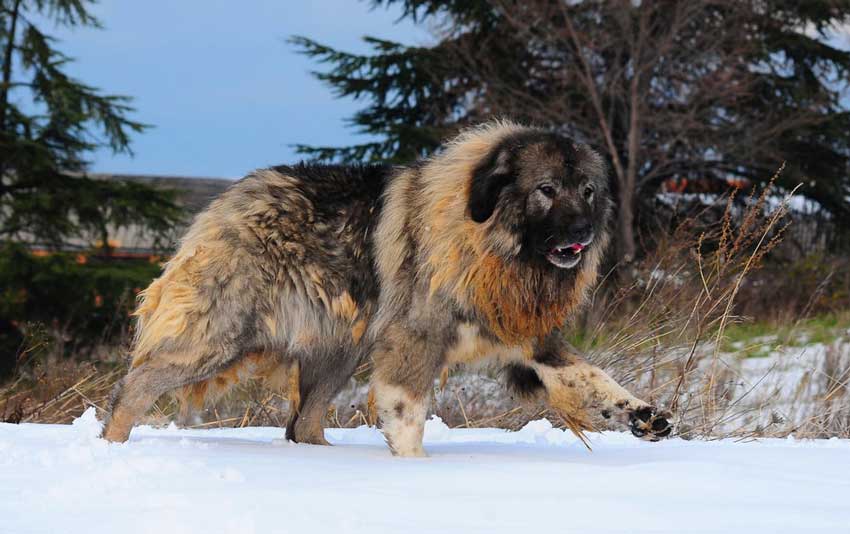 Our pet pups may be as cuddly as teddy bears, but dogs actually descend from ancient wolves. However, domestication and breeding make today’s dogs resemble other animals like foxes or bears.

But what dog looks like a bear? Read on to learn about some of the most popular dogs that look like bears, grizzlies, pandas, and teddy bears.

The Akita is a large breed with an intimidating presence. Traditionally, they were used in ancient Japan to guard nobility and royalty. This powerful breed was also bred to track down large game, including wild boar, deer, and black bears.

While Akitas are very loyal, they are stubborn and can be a challenge to train. They attach to their humans and can become extremely faithful companions. They are wary of strangers and make good watchdogs or guard dogs.

A relatively silent breed, Akitas don’t usually bark unless there is a need. However, they are vocal and communicate in throaty grunts, mumbles, or groans.

Also known as Sammies, Samoyeds are smart, social pups who seek out human love and attention. They are strong pack dogs who can be destructive if left unstimulated or without an established alpha.

Sammies originated from the Samoyede tribe who migrated to Siberia. They are a hearty breed that can withstand some of the coldest temperatures on Earth. Traditionally, Samoyeds supported their semi-nomadic owners by keeping watch and hunting.

While they originally hunted reindeer for food, fur, and leather, Samoyeds were later trained to herd them. They later came to England, where they became companion and show dogs.

This fluffy polar bear of a dog has a thick, white double coat, erect ears, and dark eyes. Samoyeds are known for their “smiling” faces because of the upturned corners of their mouth.

Like their Samoyed relatives, the Eurasier is a pack-oriented dog that does well with a loving family but should not be left alone, or it may become destructive. They are a loyal breed that does well with children and other animals. These bear looking dogs are relatively new as well.

In the 1960s, Julius Wipfel, a German breeder, started breeding Chow Chows with Wolfspitz dogs, and then later Chow Chows with Samoyeds. By the 1990s, the United Kennel Club (UKC) recognized the Eurasier in its Northern breed category.

While the Eurasier is well known in Europe, specifically Germany and Switzerland, it is less known in the United States. However, their temperament and cute, bear-looking features are increasing their overall popularity.

Cuddly as a teddy bear, the Eurasier is an even-tempered, affectionate dog and a crossbreed of the Samoyed and the Chow Chow. It has a fluffy, medium-length coat with a thick undercoat.

It may be hard to believe, but the Pomeranian descended from large sled dog breeds. This compact companion dog does well in apartments even though it tends to bark a lot.

Despite their small size, Pomeranians are in the same family of dogs as the larger Norwegian Elkhound, Samoyed, and Alaskan Malamute breeds. They got their name from the German province of Pomerania and became popular when Queen Victoria showed her poms in a conformation show.

Pom-poms are feisty little dogs but intelligent and fiercely loyal to their family. They are lap dog-sized but maintain an independent and curious nature, so it is crucial to train them like you would a larger breed dog.

Despite being the smallest breed on this list, Pomeranians resemble teddy bears with their rounded, erect ears and fluffy bodies.

The Tibetan Mastiff is a large, working group breed, along with the Akita, Bernese Mountain Dog, and Doberman Pinscher, and known for being strong, intelligent, and alert.

Since Tibet is so isolated and these Mastiffs are such an ancient breed, their exact origins are unknown. They are known as the guardians of the Himalayas and ancestors of all modern mastiffs.

Despite their size, Tibetan Mastiffs are surprisingly agile. They prefer structured exercise with a task like fetching frisbees or balls.

The Tibetan Mastiff is a gentle giant. It is intelligent and easy to train despite resembling a large black or brown bear with its folded ears and bushy tail. Tibetan Mastiffs are usually black, brown, gold, tan, or grey with a thick overcoat and wooly undercoat.

Also known as Mals, the Alaskan Malamute is another working-class breed. They are bred to pull sleds and have a robust build with powerful shoulders, a deep chest, and a dense, weatherproof coat.

Mals are an ancient breed that crossed the Bering Strait accompanied by a nomadic Inuit tribe approximately 4,000 years ago. While Huskies are bred for speed in pulling sleds, Mals are freighters that can haul heavier loads.

The Alaskan Malamute is an intelligent but willful breed that can become dominant if not properly trained. Obedience training is essential for Mals, but they can become loving, faithful members of any family.

While the Alaskan Malamute is often described as wolf-like, it also has bear features, like its broad, large head, bulky muzzle, and triangular ears. Unlike Siberian Huskies, purebred Alaskan Malamutes will always have dark brown eyes.

Keeshonds are family-oriented dogs who are great with children. They were long referred to as the “Dutch Barge Dog” because of the companionship they provided on the barges and boats along Holland’s river and canal systems.

The Keeshond became a symbol of the Dutch Patriots Party in the 18th century. Its name is thought to derive from a Patriot mascot dog named “Kees,” which is where the Keeshond gets its nickname.

Kees are smart and eager to please, making them easy to train. Many Keeshonds are used as therapy dogs because they are such gentle companion dogs.

Like most of the dogs on this list, Keeshonds are built for colder temperatures. This medium-sized dog typically has a black, cream, or grey coat and a large, plumed tail.

As their name suggests, Flandres originated in regions of France and Belgium, and both of these countries claim the Bouvier Des Flandres as their native breed. They are known as a versatile breed because they can pick up so many different tasks. Flandres were popular among farmers, where they worked as herders, cart-pullers, and watchdogs.

Flandres nearly became extinct after WWII but were kept alive by those who later moved to the United States.

Unlike most dogs on this list, Bouvier Des Flandres dogs have a rough outer coat with shaggy eyebrows, beard, and mustache. This large breed dog resembles a bear with its short back and fawn or black coloring – although it can also be grey or brindle.

This fierce and bold breed is a tender guardian breed who fearlessly protects its family. There are two breed standards for the Caucasian Shepherd, including the Mountain type, which is larger with a long coat, and the Steppe type, which is smaller with a short coat.

The Caucasian Shepherd originated in the Kavkaz (Caucasus) mountains of Eastern Europe. This giant breed dog is thought to be a relative of Asian mastiffs or Balkan Sheepdogs.

This massive dog could weigh as much as a small bear, and they are known for the pronounced mane around their neck. Caucasian Shepherds have thick coats that feather on their hind legs and tail.

Another large to giant breed dog on this list is the Leonberger, a mix of the long-haired Saint Bernard, Great Pyrenees, and Newfoundland. Many believe that Leonbergers have since been bred with other dogs – although there are no written records.

Like the Caucasian Shepherd, the Leonberger has a pronounced mane around its neck. They also have a dark mask of a face with dark, almond-shaped eyes and triangular ears. Its long double coat is water-resistant.

So, what dog looks like a bear? Even if they may not be as wild as grizzly bears or black bears, the ten breeds we’ve listed above can be great additions to your household if you’re looking for a bear-like dog.