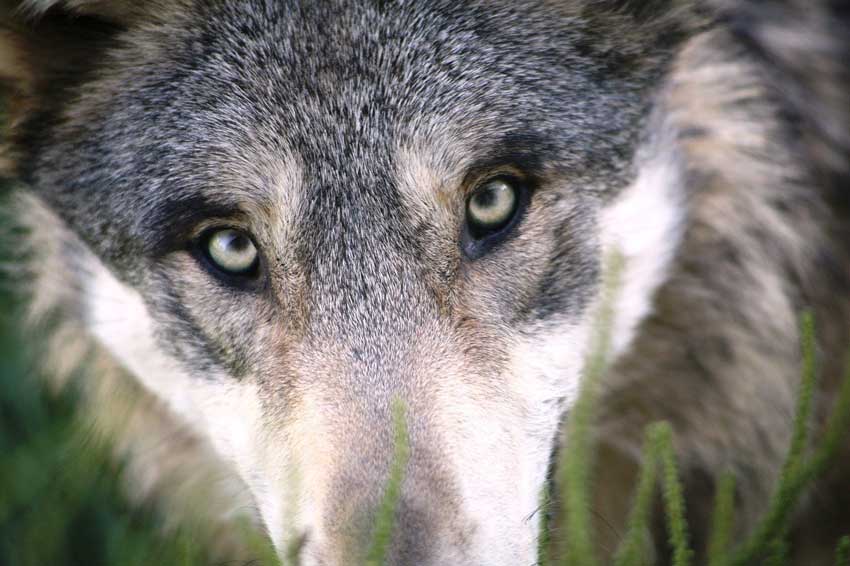 Wolves are magnificent, beautiful creatures, but they make very poor house pets. Still, that hasn’t stopped many from trying to crossbreed wild wolves and domestic dog breeds to get an animal that looks like a wolf but acts like a traditional domestic dog.

Fortunately, most potential dog owners aren’t looking for a true wolfdog hybrid, but rather dogs that look like wolves! You may be surprised to find that there are all kinds of dog breeds that are safe, trainable but still are reminiscent of their wolf cousins.

While there are dozens of dog breeds that look like wolves, we’ve curated a list of our ten favorite breeds. Not only are these dogs wolf-like in appearance, but their demeanor and personality make them suitable for most households (especially our last choice).

But which dogs look like wolves the most and which make great pets? Take a look at our ten favorite wolf-like dog breeds.

Though German Shepherds are a relatively common breed, many don’t realize that they are dogs who look like wolves! They are a similar build and size, and while the standard brown and black coat isn’t very wolf-like, German Shepherds can be found in common wolf-coloring, like solid black.

As you might have guessed, German Shepherds were originally from Germany. The modern breed started to arise in the 1800s as dogs were bred for intelligence and the ability to be trained. German Shepherds originally helped herd sheep, but are now used for a wide variety of tasks.

Why get a German Shepherd? They are highly intelligent dogs commonly used for home-protection, police dogs, and help with common assistive tasks. They are a great family choice!

Samoyeds are large, thick-coated dogs that are reminiscent of arctic wolves. While their appearance can be intimidating, they are amiable dogs. They commonly warm up to strangers quickly, which makes them a poor choice as a defensive breed, but they make a great addition to a loving home.

If you want a dog that looks like a wolf but also is puppy-like in demeanor, then a Samoyed is perfect for you. You’ll need to take time to properly groom them regularly, but their gentle, friendly demeanor is a great addition to most households.

As soon as you read the name, you likely saw an image of a husky pop into your head. Their black and white coat is widely recognized, as are their striking blue eyes (though not all huskies have that eye-coloring).

Siberians Huskies were originally bred in Siberia and made their way to Alaska in the early 1900s. They were bred to be hard-working sled dogs, which is why huskies are notoriously athletic and energetic.

Like Samoyeds, huskies are a friendly breed, though they do require more intensive training for proper behavior. We wouldn’t recommend this breed to a first-time dog owner, but experienced owners might find a new best friend in these wolf-like dogs.

As the name implies, this dog breed is extremely wolf-like. It is large with coloring common among wolves, erect ears, and a narrow snout. A relatively recent breed, the Czechoslovakian Wolfdog was originally bred to be a military combat partner. While they looked ferocious, they didn’t really act like it, and they have become a popular household breed.

Like the Siberian Husky, the Czechoslovakian Wolfdog requires several hours of exercise a day and is not suitable for first-time dog owners. However, being 6% wolf, this breed is a great choice if you want to get as close to a wolf-like dog breed as you can.

Unlike the other breeds on our list, you probably will have a hard time finding a Canadian Eskimo Dog. They are extremely rare, with some estimates saying that there are less than 400 in the world today. If you’re able to find one, they make a great family pet.

One of the most striking wolf-like characteristics of this dog is its physical build and coat. With unusually thick legs and a stringy coat, this is a dog that looks like a werewolf more than anything.

The Northern Inuit Dog is a large dog with a thick coat. Much like the other cold-weather dogs on our list, this is one of the dog breeds that look like a wolf with deceptive appearances. They are quite friendly, making them great choices for novice dog owners or families with small children.

Another great choice for a ferocious-looking dog that is really just a big, fluffy teddy bear! Just make sure you’re prepared to handle their fur, and you have ample space for them to move and exercise.

The Saarloos Wolfdog is another famously wolf-looking dog. Often indistinguishable from full-fledged wolves, this breed has been around since the 1930s. Its facial features are what make it wolf-like, with very little variation from actual wolves.

Why do they look so much like wolves? Because they are actually wolf hybrids! The breed was developed by crossing German Shepherds with Eurasian grey wolves. Since true wolf hybrids are quite dangerous, the puppies from this mix were bred with German Shepherds to dilute the aggressive nature.

Being very close in appearance to a wolf has its drawbacks with this breed. They are wary of strangers, avoid physical contact, and require plenty of exercise. A great choice for those that like the company of a dog that doesn’t need a lot of physical affection, but a choice that inexperienced dog owners or families with children should avoid.

Very similar to Siberian Huskies in appearance, the most notable difference is their size. Alaskan Malamutes can be up to twice as large as the average husky and have much thicker fur. They shed constantly, so if you’re not ready to become one with fur in your home, consider getting another breed.

Like Siberian Huskies (and other arctic breeds on this list), the Alaskan Malamute is extremely friendly, but they are a bit calmer than huskies. If you like the idea of a gigantic, friendly dog that doesn’t require extensive exercise, this breed is a great choice.

However, due to their size and strength, you’ll need to be diligent with training. They can drag people while being walked pretty easily, so they need to be taught how to walk on a leash and should otherwise be thoroughly trained.

Though its name is an indigenous Algonquin word meaning “mighty wolf,” there isn’t a speck of wolf DNA found in these friendly dogs. The breed is derived from a mix of sled dog breeds, which means its appearance and personality are similar to Siberian Huskies and Northern Inuits.

The Tamaskan breed is relatively new, having only been developed for the past 20-30 years. Breeders mixed Siberian Huskies, Malamutes, and German Shepherds in an attempt to create a dog that looked extremely wolf-like but was highly intelligent and trainable. Breeders were successful in their endeavors, and the Tamaskan breed continues to grow in popularity.

As with many of the arctic sled dog breeds on this list, Tamaskans are an energetic breed that makes for a great family pet. You’ll be happy to find that they are not quite as stubborn as huskies, so they’re easier to train. Tamaskans are an excellent choice for families that like how huskies look but not necessarily how they act.

For the final breed of wolf-looking dogs, we have the small and adorable Swedish Vallhund. They only get to be about a foot and a half tall and are commonly described as what a wolf-Corgi hybrid would look like (though the breed has neither in its bloodline).

These small, cute dogs were originally bred as herding dogs, so they are full of energy and love to play. They are very friendly and are great matches for first-time dog owners and families with small children. As soon as you see their sweet faces, we’re sure you’ll fall in love with this breed.

If you want a wolf-like dog breed, there are a plethora of safe, fun choices to choose from! However, as you should before any dog purchase, make sure that your home is suitable for your particular choice of breed. Buying a dog but not being able to meet its needs is a perfect recipe for a dog to develop challenging behavioral problems, health problems, or just be unhappy.

From the dogs on our list, there are three major factors you should consider: temperament, size, and exercise requirements. If you don’t exercise much and don’t have a safe place for your dog to run and play, many of these breeds will get bored and unhappy, leading to destructive behaviors.

Likewise, many of the breeds, like the Alaskan Malamute, are very large and need ample space just to move and exist. While most of these breeds are friendly, many, like the Saarloos Wolfdog, are independent, lone animals that won’t be happy with handsy, loud children.

Consider the home you can provide for your dog, as well as the qualities you want most, and we’re sure you’ll end up with the perfect wolf-like dog breed for you and your family.