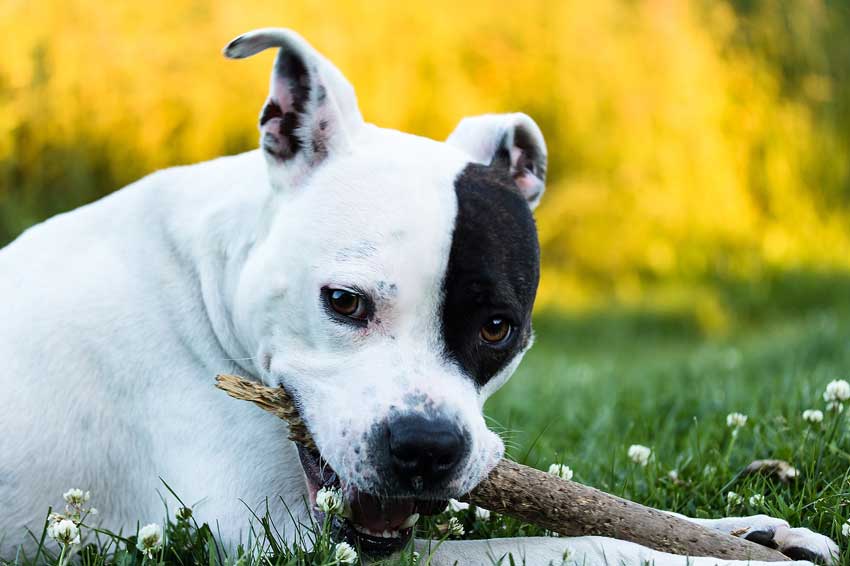 We love our dogs and rarely hesitate to kiss them on the nose or play tug of war with them, but how many of us stop to really consider what would happen if we became the accidental target of their powerful bite?

Today, dogs are the most beloved and loyal pets, with over forty-four percent of households that have a dog as a pet. There is no doubt that dogs will do almost anything for their owners, waiting for them at the door while they are at work or sleeping at their person’s feet while they are watching television. There is rarely a time that those sweet puppy dog eyes aren’t watching you and wondering how they could show their love more.

When we raise a dog in a household, we have to remember that they are still animals, and they can be unpredictable, especially when they are scared or feel that they or a member of their pack is threatened.

How is the Strongest Bite Calculated?

So just how much PSI (pound-force per square inch) do the top 10 dog breeds with the strongest bite have, and which dogs are left off the list? It may just surprise you.

The Rottweiler originated in Germany and was originally bred to help work on a farm, such as pulling carts and guarding livestock. They were the original police dog and still find a place in the force today.

Rottweilers are not the largest dogs, but they are sturdy and agile, with a seemingly endless amount of energy. They are used in search and rescue missions by the police and military. Despite their instincts to protect, Rottweilers are great companions and are exceptionally well behaved. This confident breed has a PSI of 328, more than double its own weight.

This breed is believed to have originated in northern Japan over 2000 years ago. These dogs were only owned by the Imperial Family and other notable stature families for hunting purposes. The largest of the Akita breed was used for hunting large prey, while in more recent centuries, they were used as a show of prosperity and power of the Imperial House of Japan.

While it is forbidden to export this breed outside of Japan, this breed is well known because of a dog, Hachiko, who waited by a Shibuya Train Station for ten years, waiting for his master to return. The dog caught the world’s attention, and the story was made into books and movies, so it’s safe to say this breed is loyal.

If these stubborn dogs decide to clamp down on you, it will most likely take them deciding to let go for you to be freed, and with a PSI of 350, that’s a lot of bite.

The Leonberger originated in the city of Leonberg (hence the name), in Baden-Wurttemberg, Germany. These massive dogs average 150 pounds for males and 115 pounds for females. They have a double coat and are majestic creatures who were derived from the Great Pyrenees, Newfie, and Saint Bernard. It’s no wonder these giants are considered trustworthy dogs who are used in search and rescue missions.

It is not common that this breed will bite, but if they feel the need to protect themselves or their family, their PSI is a whopping 399.

This large breed was first bred in Argentina to protect its owner and have a tenacity for hunting specifically. It is a descendant of the Cordobra Fighting Dog and other vivacious breeds.

The Dogo Argentino is an obedient breed but must be adequately socialized and have obedience training to not display aggression, although they will rarely snap without provocation. If you are on the receiving end of this dog’s bite, it is a stunning 500 PSI, impressive stature and fast reflexes, which makes this breed feared by many. Males can get up to 100 pounds, with females topping in at around 90 pounds.

The Dogo Canario is a large breed, used historically in war. This highly aggressive breed originated in Spain’s Canary Islands but is anything but dainty as a bird. This is one breed of dog that would not make a good choice for a family dog. With a combination of aggression and a 540 PSI, it’s no wonder that this dog is banned in several countries. Both males and female Dogo Canario top in at almost 100 pounds.

Of course, this enormous breed comes from England and is a calm dog, despite their ancestors being vicious war dogs. These lazy dogs are happy to chill and watch over their family and are exceptionally caring and gentle with children.

Even though the English Mastiff is a gentle breed, they can do some real damage if there was ever a need to protect themselves. With a 556 PSI, you do not want to get your hands caught in their mouths at play or meal time.

The Dogue De Bordeaux originated in France in the late 1800s, in the region of Bordeaux. This dog is very muscular and used in many different capacities, from pulling carts and carrying heavy objects in transport, guarding livestock, and the castles of Europe’s elite.

Today, this breed is quite a lovely family dog, and unlike other mastiffs, enjoys being around small children. It will have no reason to use its incredibly powerful 556 PSI jaws on you, as long as you give no reason for it to do so.

The Corso originated in Italy and has been in North America since 1988, and is from the ‘mastiff’ family. Cane Corsos are ‘guardian’ dogs and, throughout their history, have acted as a guard dog or a skilled hunter. The name ‘cane’ is the Italian word for dog, and the Latin term cohors, protector or guardian.

The Cane Corso is a muscular dog and naturally big-boned working dog with a kind but strong disposition. The Cane Corso is an intimidating dog in size and power, giving off the impression to some that they are not family dogs. These large and vigilant dogs are not easy to keep, so it is good to research before committing to bringing one into your home. If you are looking for a large, athletic dog that will keep away any unwanted visitors, this is the breed for you.

The Cane Corso is 80 to 120 pounds and on average and ranges from 23.5 to 27.5 inches when measured at the shoulder. The Cane Corso has a bite force of 700 PSI that does extreme damage to anyone or animal posing as a threat. This breed has short, coarse hair and is usually black, gray, red, or fawn in color, with the bridle in all colors. On rare occasions, the Cane Corso may have a tiger-like pattern in light and dark brown. The life expectancy of these gentle giants in 10 to 12 years.

Bandogs first originated in Great Britain, and their name ‘bandog’ (bandogge), referred to the jobs the dog had, such as hunting and guarding its owner, rather than for the breed itself. The breed began as a variety of large, strong dogs such as shepherds, hounds, and mastiffs, all bred to create the first bandog.

While these dogs were initially bred strictly as guard dogs and used for the sole purpose of destroying anything that threatened to hard their territory or owner, today, they are good family dogs, but they must be well exercised and trained.

The most powerful PSI comes in at 743 with the Kangal, the world’s most powerful dogs in the world and they have the bite to prove it. These giants originated in Turkey, in Sivas CIty, and were used as herding dogs to watch over sheep and other flocks against predators. They are a fiercely protective breed trained to protect their family and show great gentleness toward children.

With the strongest bite per square inch, this breed is best approached slowly if they are not familiar with you, but once they see you are not a threat, they are a loving and protective dog.

Luckily, most of the breeds that have the greatest PSI will not ever try to use them on any person. Most of these giant beasts want nothing more than a cuddle and a warm bed to sleep in while they watch over their flocks or people.