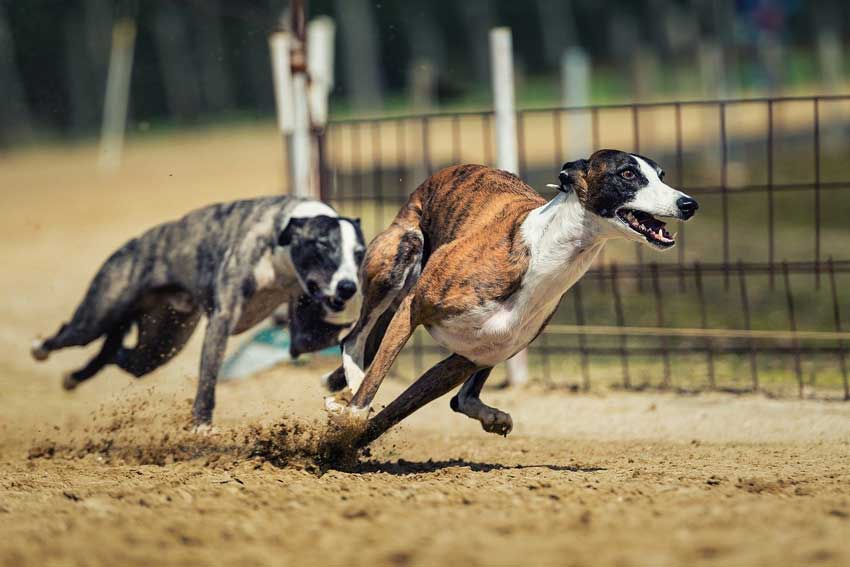 All dogs seem uniquely fast as they speed across the lawn or around the house, but do know what the fastest dog breeds in the world are? On four legs, dogs run faster than many animals, including humans. In this article, we’ll list the top 10 fastest dog breeds and the speed they run at.

Characteristics of the fastest dog breeds

Many of the fastest dogs across the globe share similar physical traits. They tend to have long legs and slender bodies. Most have developed over centuries and are frequently used for sport, hunting, and other energy-consuming activities.

The fastest dog breeds in the world are notably energetic and require daily exercise to stay physically and mentally stimulated.

If you have a dog that has a need for speed, read this article to see if your dog made the list of the fastest dog breeds in the world. Some of these breeds are easy to assume, but others might surprise you. 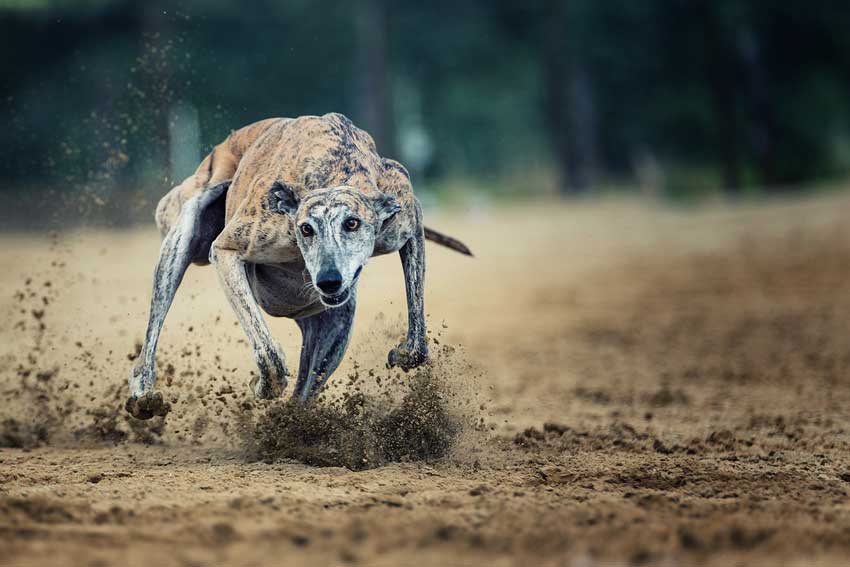 No surprise here. The Greyhound is an intelligent and gentle breed that possesses powerful legs, a flexible spine, a deep chest, and a slim build that allow them to run at an impressive top speed of 45 mph (72 km/h). This speed can be reached within 98 ft (30 meters) or the equivalent of 6 strides.

The Greyhound is the fastest dog breed in the world. Originally, they were developed to chase deer, fox, and hare. Greyhound racing quickly refined the breed’s natural ability. It is believed that the breed originated in Egypt and has been kept as prized pets among royalty for thousands of years. Greyhounds are natural sprinters and not endurance runners, and these dogs are quite content spending much of the day napping.

Greyhounds have been nicknamed the “40 mph couch potato” and do well with a few walks every day with the occasional sprint across the dog park. It’s possible to purchase a greyhound puppy, but the majority of pet greyhounds in the United States are retired racing dogs.

Though they are similar in appearance to the Sloughi and Saluki breeds, Greyhounds are actually more related to herding dogs. The Greyhound’s origins are from the Celts of Eastern Europe or Eurasia. 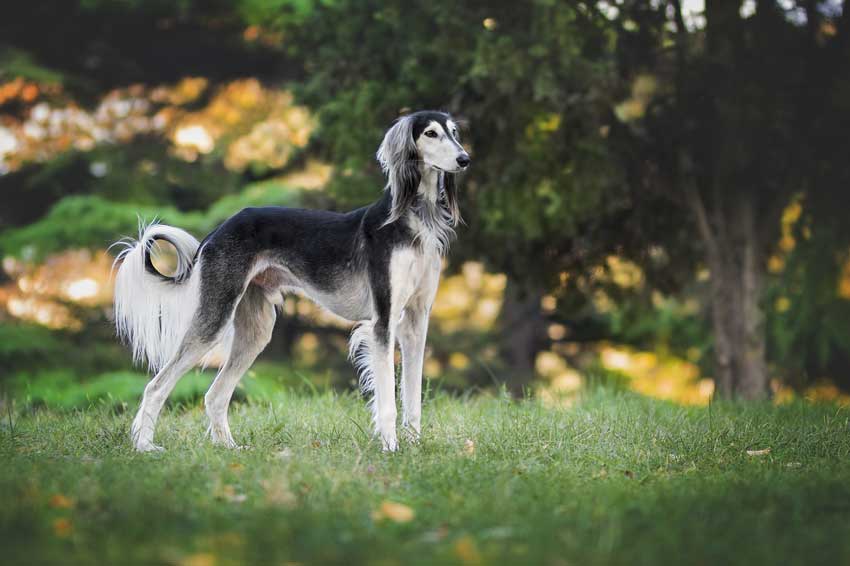 Salukis are a bit slower than Greyhounds, reaching a top speed of 43 mph (69 km/h). However, across distances in excess of 0.5 miles (800 meters), Salukis are faster. This can be attributed to their heavily padded feet and unmatched stamina.

Not only is the Saluki one of the fastest dog breeds in the world, but it is also one of the oldest. This breed’s roots can be traced back to Egyptian times and they are considered to be the royal dog of Egypt. Symbols that resemble these dogs are depicted on tombs around 2,100 BC. Furthermore, they were often mummified by Egyptian pharaohs and considered as a gift from Allah by Muslims.

With their given speed and endurance, they were developed to hunt wild animals. Unlike many breeds, Salukis hunt by sight rather than by scent. They are classified as sighthounds.

These dogs have a long and narrow head with drop ears and big eyes. Typically, the modern Saluki stands 23-28 inches (58-71 cm) tall at the withers. They weigh 35-65 lbs (16-29 kg) and the females are slightly smaller. Salukis have deep chests and long legs with a slim-built body. 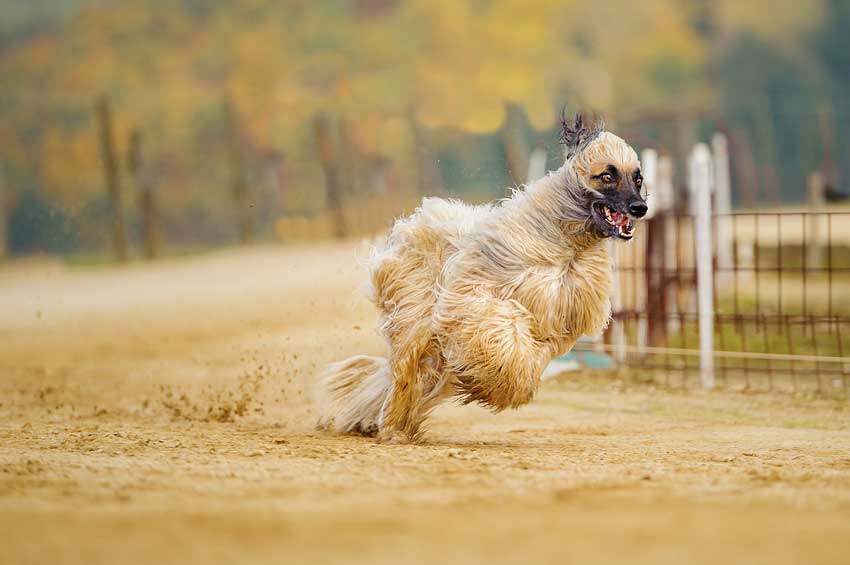 Despite its beauty, Afghan Hounds are very athletic dogs. They pivot incredibly well and possess high levels of endurance. The breed has a top speed of 40 mph (64 km/h).

Closely related to the Saluki, the Afghan Hound is the third-fastest dog breed in the world. These dogs date back to pre-Christian times, originating from Afghanistan, and were primarily developed for hunting wild game across deserts and mountains. In modern times, the Afghan Hound is a popular show dog due to its distinctive long coat and tall stature.

This is another ancient breed. They have an independent personality and are difficult to train for first time owners. Their long locks of hair require extensive grooming to prevent the coat from becoming matted. These dogs are clownish and are natural escape artists and due to their speed, can be very difficult to catch. In addition, they usually bond with one particular family member.

There are roughly 13 different types of Afghan Hound. The breed is classified as a sighthound. The modern purebred Afghan Hound descends from dogs brought to Great Britain in the 1920s by King Amanullah. He gave the dogs away as royal gifts.

The Afghan Hound stands 24-29 inches (61-74 cm) tall and weighs 44-60 lbs (20-27 kg). Their coat comes in a variety of colors, but white/cream coats are the most common. Many of these dogs feature a black facial mask and some possess what many people refer to as a Fu Manchu mustache. 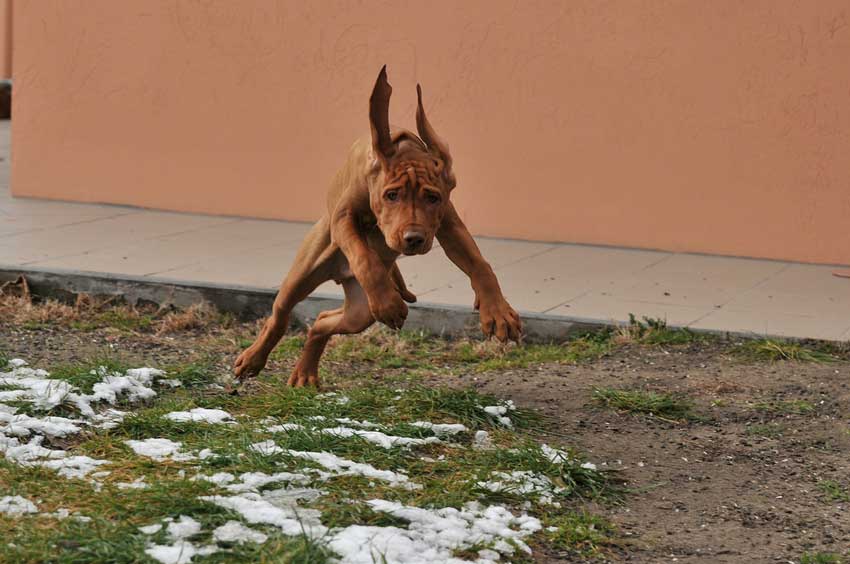 With their robust yet light build and muscular frame, the Vizsla can reach a top speed of 40 mph (64 km/h).

The Vizsla tied with the Afghan Hound and the Ibizian Hound as the third-fastest dog in the world. Originally developed in Hungary as a retriever and pointer, they were developed by hunters for hunting wild game. This trait has carried into modern times earning the nickname “Velcro Vizsla” for their tendency to become attached to one person.

Early warlords and barons kept this breed as companions and were held in high esteem for their athletic abilities. During early occupational disputes and world wars, the breed came close to extinction. In fact, it’s believed that only about 12 Vizslas survived World War 2.

Vizslas have lots of energy and need lots of daily exercise. Since they grow attached to their people, they are susceptible to separation anxiety if left alone for too long. They make great pets for older children but are too rambunctious for smaller kids.

These dogs have a short coat with no undercoat, making them ill-sorted to living outdoors. The Vizsla’s nose has a reddish color that tends to blend with their coat. 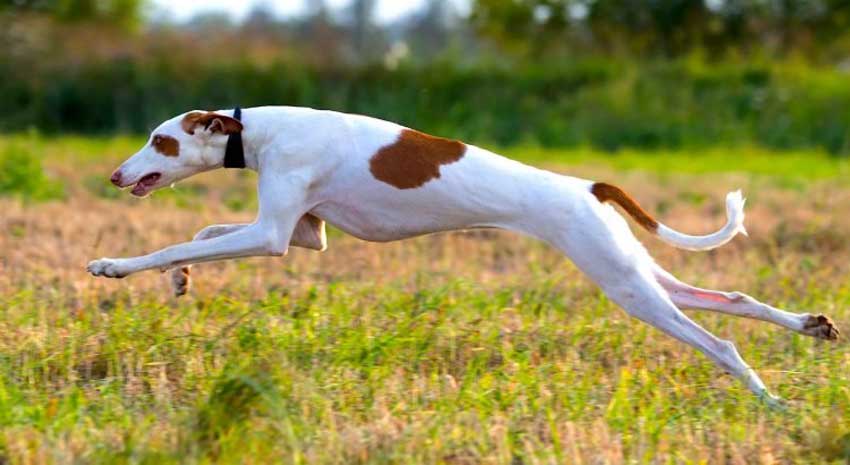 The Ibizian Hound originates from the island of Eivissa. The breed was traditionally developed in France and Spain to hunt small game, such as rabbits. Due to their boost in speed, they can hunt on many different types of terrain. Impressively, they use their sense, sound, sight, and scent in the process. Since they were considered better at the task, females generally made up the majority of a hunting pack.

These dogs are agile and elegant. They are known for their impressive physique, with large standing ears and a lean neck. There are both smooth-coated and wire-coated Ibizian Hounds. Their coat is notoriously red and white. 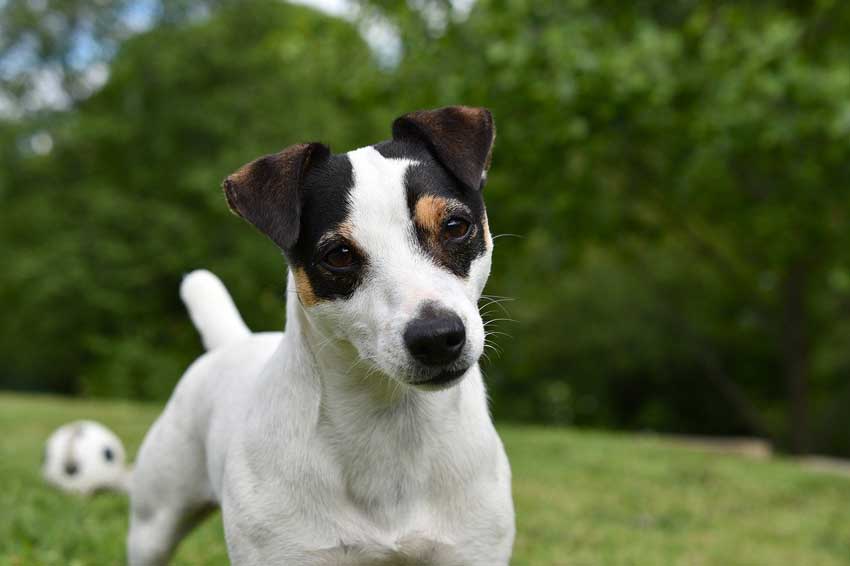 Believe it or not, the Jack Russell Terrier with its small stature is the fastest small dog breed in the world with a top speed of 38 mph (61.2 km/h).

Jack Russells have a notorious amount of energy and a rather independent mindset. They don’t fancy boredom and can get into trouble when they’re understimulated. If you own a Jack Rusell Terrier, consider picking up dog sports, they are incredible athletes. 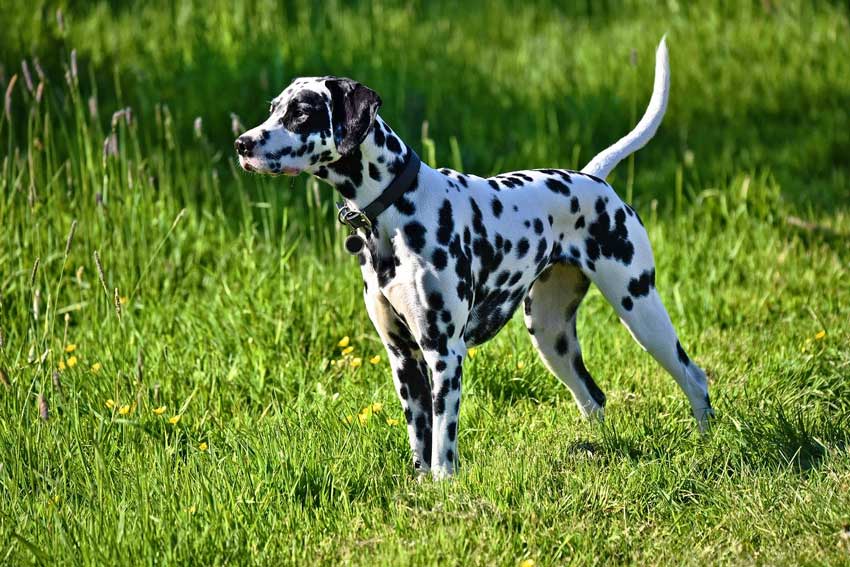 The Dalmation is a mid-sized dog breed that has exceptional endurance and stamina. They are one of the fastest dog breeds in the world clocking in at 37 mph (60 km/h).

Dalmations originated in Croatia. They have been seen in paintings that date back to the early 1600s. In 1719, Bishop Petar Bakić introduced the Dalmation as ‘Canis Dalmaticus’ in the church chronicles.

Here’s a cool fact. Dalmations were developed to run beside horse-drawn carriages for miles at a time, and deter highway robbers from approaching the vehicles. They became a status symbol. As a result, the breed was nicknamed “the spotted coach dog”.

The breed is known for its unique dark, liver-spotted coat. Oddly enough, the Dalmation’s coat isn’t spotted at birth. Instead, puppies are born with plain white coats. These spots normally appear within 10 days, but the dark spots are visible on the skin. 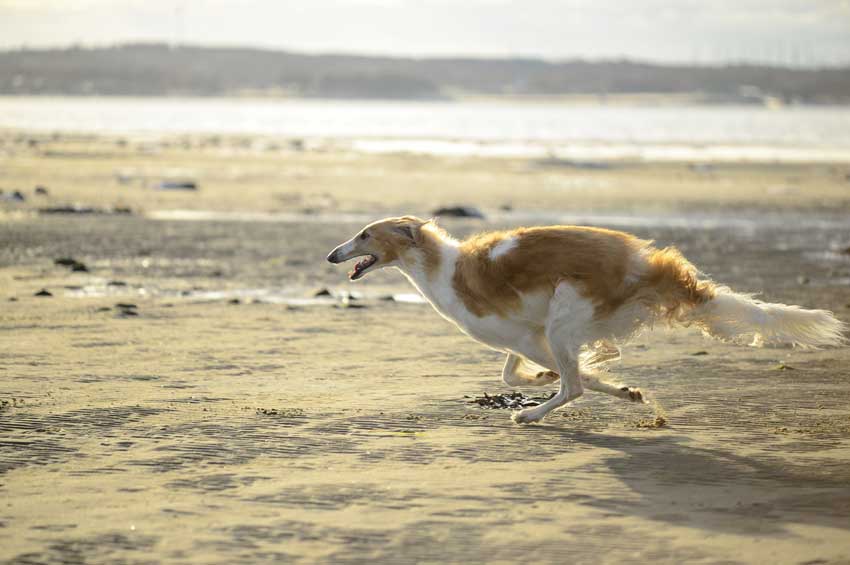 With their athletic physique, Borzois were developed to pursue wild game with a strong instinct for the chase. Hunting parties typically contained 3 of these dogs. This breed can reach a top speed of 36 mph (58 km/h). They are the 8th fastest dog breed in the world.

They are a favorite breed among royalty. Much like the Greyhound, the Borzoi is content with a moderate level of activity and is comfortable napping for long periods of time.

Borzois are also known as Russian Wolfhounds. The breed originated from central Asian countries and was brought to Russia for further development. They have a similar shape as the Greyhound and are also classed under the sighthound family.

Borzois have a silky coat that is either slightly curly or wavy. These dogs are notorious for shedding, so regular grooming is required. They have a soft-undercoat under their top-coat that thickens in cold winter months and sheds during summer months. 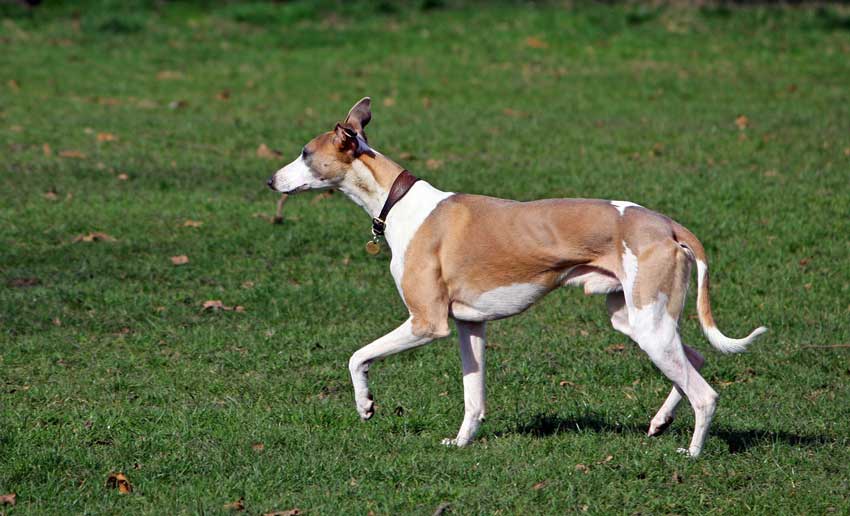 The Whippet is a mid-sized breed that originated in England. They are descendants of Greyhounds and possess a similar speed. Whippets have a top speed of 35 mph (56 km/h).

Smaller and slower than Greyhounds, Whippets are also known as the “poor man’s Greyhound”. They have a high prey drive and typically don’t do well with cats and other small animals. Whippets should be leashed when outside unless you have high fences. Due to their prey drive, they chase anything that moves, regardless of their training. If they get plenty of exercise, Whippets make good pets and enjoy a good snuggle.

This breed was developed as a sighthound, chasing the wild game in open areas at high speeds. In 1610, the term Whippet came to fruition. They are also known as “snap dogs” for their ability to “snap up” nearby prey.

With their exceptional speed Whippets have also seen the racetrack. The earliest form of Whippet racing was known as “ragging”. To start a race, trainers kept the dogs on a leash, referred to as a slip, and released the dogs at the same time. The dogs were then loose to race towards their owners waving rags or towels. 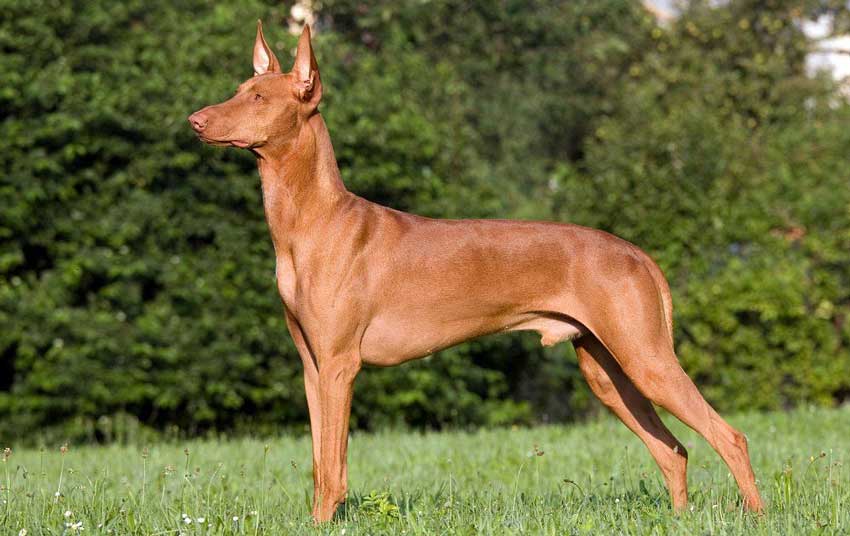 The Pharoah Hound is a proficient hunter. Typically, female Pharoah Hounds put pressure on a chase while male Pharoah Hounds keep prey from branching off. Historically, their top speed of 35 mph (56km/h) ensures they were successful hunters. To alert hunters and other dogs, they release a distinctive sharp bark.

This breed is likely descended from one of Ancient Egypt’s prized hunting dogs, the Tesem. There are remarkable similarities between Egyptian images on tombs and Pharaoh Hounds.

The Pharoah Hound is a dashing dog that appears elegant, yet athletic. The breed has a well-defined muscular structure with a slim build. They have long chiseled skulls and are their eyes are usually amber-colored.

So there they are. The 10 fastest dog breeds in the world. All of these breeds are wonderful and we’re grateful for their special talents. If you own any of these dogs, make sure to give them opportunities to test their limits. These fast dogs have a need for speed. So in between napping sessions make sure to get your dog outside.

Disclaimer: This article contains the kinds of facts that shift with time, so if you come across facts that need checking, please leave a comment.