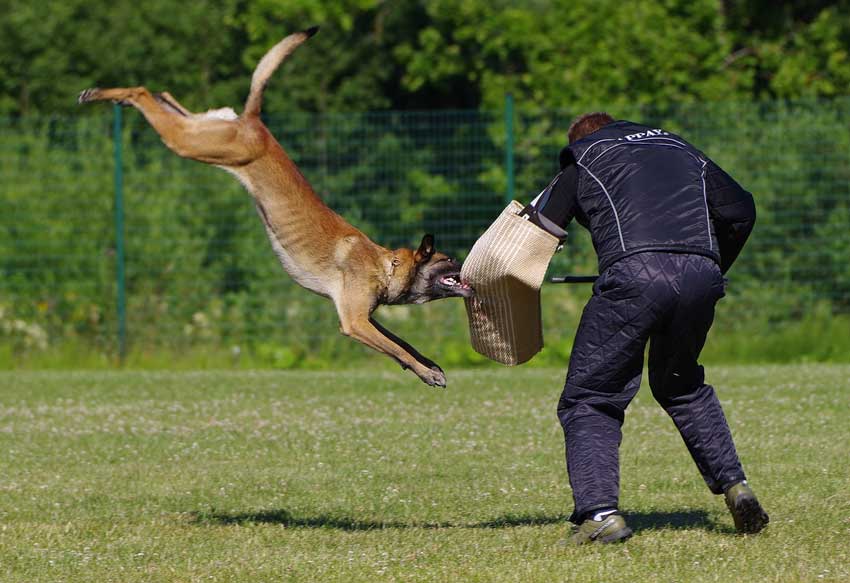 When many people think of police dog breeds, they may immediately think of a German Shepherd. While German Shepherd is undoubtedly one of the most popular breeds to work with police, other breeds have played an integral role in law enforcement.

A dog’s keen qualities, such as smell and speed, have helped police officers in their daily work. Though the K9 training process has been around since the late 1800s, the United States did not regularly utilize K9s until the 1970s.

Qualities of the Best Police Dogs

Police dogs must possess certain qualities and skills to ensure they are an excellent addition to the force and useful in their handlers’ daily lives.

Dogs that make for good police dogs are breeds that already carry many qualities the force may be looking for, such as a strong sense of smell and hunting instincts.

These dogs bring significant endurance and strength to the force. They are great protectors and defensive aids for their handlers. Police dogs have more discipline than the average household pet and use their sense of smell, aggressiveness, and intelligence to track down criminals while on the force.

An ideal canine for the job is in excellent health and executes years of satisfactory service in the workforce.

Breeds for police dogs have rightfully earned their title and have a history of showing why only certain breeds can live up to the expectation of working with law enforcement.

This breed lands on the list as one of the most popular dogs to ever be on the police force. German Shepherds have an aggressive appearance and a loyal heart, making them a perfect fit for the K9 police force.

They are multi-talented when it comes to the task they can perform daily. When hunting down suspects or narcotics, these dogs stand out with determination and are calm while working under pressure.

The German Shepherd breed was bred for work and has been used as police dogs for over 100 years.

These easily trained working dogs have played a big part in the growth and success of the K9 police force over the years, and they deserve all of the notoriety they receive from society.

This highly motivated dog breed has a history of being known as a hunter, which comes in handy in their career as K9 officers. Hunters initially bred Labrador Retrievers as retriever gun dogs to retrieve bird shots. They are always eager to learn and often look for their next tasks after completing one.

Once these dogs are motivated and instructed to find something while using their powerful nose, their initial bred hunting genetics begin to kick in. You better pay attention because their determination is exceptional.

These dogs are known for their friendly behavior, making them easy to work with. They also love to please their owners, or in this case, handlers. Calm and hardworking is the best way to describe this police dog breed.

Adapting to police work as “second nature” during the time they serve allows Labrador Retrievers to utilize their talents in their daily lives.

What Beagles lack in size and aggression (they aren’t nearly as big or aggressive as K9 dogs like the German Shepherd), they make up for in hunting abilities. Their size does not limit them from performing specific tasks.

The lovable K9s were initially a breed of dogs that track and hunt small creatures such as rabbits and hares.

Beagles are incredibly reliable in “search and rescue” missions and in airports to find narcotics.

Their very keen sense of smell makes them excellent candidates for the job. Don’t allow the smaller size to deceive you; Beagles are tough and stubborn!

This K9 is a rightful member of the shepherd family alongside the German Shepherd. Malinois’ origin goes back to the days of herding livestock in Belgium. Their sheer will to protect and serve with loyalty makes them one of the police dogs’ best breeds.

Although Malinois K9s are not typically aggressive, they are trained to obey and carry out commands instantly. Their high intellectual level and agile abilities make them obedient and punctual in response to their handler’s commands.

The Belgian Malinois loyalty and ability to detect dangerous threats makes them superior police dogs and a valuable asset to the force.

Once they become well-disciplined, the Belgian Malinois can go from a happy wagging tail to snarling teeth in the blink of an eye.

This specific dog breed is a top pick amongst the police force as one of the most dependable breeds.

Bloodhounds have an unmatched sense of smell that helps law enforcement find who they’re looking for, mostly in missing children cases. As one of the original police dogs, this breed is known for its distinct hunting and tracking skills, making it a great addition to the workforce.

The bloodhound doesn’t have an intimidating appearance like other police dogs, which may actually benefit their job as police dogs. Their welcoming persona allows them to assist in missing children’s cases while comforting the child with their natural kid-loving instinct.

This dog has built a repetition of being one of the top breeds for police dogs for several reasons, their physicality being one.

Rottweilers have a general tendency to be friendly towards those they know and cautious around unfamiliar people. Due to their reputation for aggression, they provide the force with a sense of intimidation when approaching criminals.

In particular, this dog has an excellent attention span, allowing them to stay focused on the task at hand given by its handler.

Outside of being used as a police dog, this breed is also used as military dogs, guard dogs, and rescue dogs, making them very dependable for various tasks.

Airedales have made a name for themselves as one of the best breeds of police dogs.

This breed was initially bred for rat hunting rats in England. Airedales fought alongside the army in the war, and their bravery soon gained a reputation for the large Terriers.

Also, the Airedale Terrier are known for their hunting mastery and their obedience. Airedales have no problem being independent because they are not only smart but also aggressive, rightfully justifying their status as “The King of Terriers.”

These dogs have a work history dating back to World War I, when they served Germany. They served as guard and patrol dogs, but the German soo put them to other types of work.

Their daily duties included delivering messages between troops by safely working their way through the battlefield to ensure the right person received the message.

They are still utilized as K9s in Germany, where they aim to serve and protect alongside their handlers but are not as commonly seen in other countries.

The Giant Schnauzer is referred to as “a wolf in sheep’s clothing,” because they cloak their aggressively protective instincts until an appropriate situation arises where they can unveil.

This K9’s courage naturally drives the territorial characteristics that make the dog so unique.

Giant Schnauzers set the tone for being a very reliable breed of police dogs after World War I due to their exceptional service. However, the Giant Schnauzer needs to stay active on a daily basis.

These dogs were bred as natural workers, trained to drive cattle from the farm to the market, and protect farmers’ families. So their protective instincts and need for an active lifestyle is well justified. Don’t mistake the Giant Schnauzer for an adorable dog you can pet anytime you want. They are sure to react defensively.

This tactical K9 is a member of the shepherd herding family, originating from the Netherlands, and has all the intellect of a German Shepherd, only with more agility and versatility.

Dutch Shepherds are swift dogs, so they move better than their cousins, the German Shepherd. This is as a result of their lighter weight and little body hair.

Their outstanding courage, determination, and loyalty to their handlers make them the ideal K9 for the police force.

However, the Dutch Shepherd breed is typically not as aggressive as the German Shepherd, but that does not make their will to protect and serve any less.

Final Thoughts on These Breeds of Police Dogs

Though we’ve given a detailed description of the ten best breeds of police dogs on this list, other dog breeds have served throughout the years with law enforcement.

All types of police dogs have been helpful throughout history and remain active members in bettering their community in today’s time. The best breeds of police dogs greatly depend on the training and the specific dog’s instincts.

Service dogs are woven through history for thousands of years, from herding sheep on a…

When it comes to the working class of dogs, there are special breeds who make…