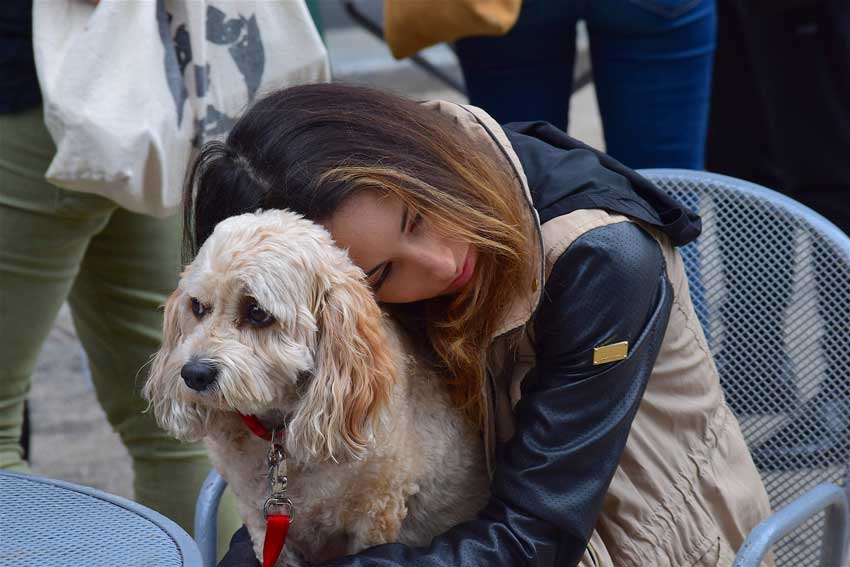 We love dogs and dogs definitely love us, but as the saying goes, there is a thin line between love and hate. Dogs, like humans, have their pet peeves and can become very annoyed with their owner’s actions and even smells.

Yes, I know you think that this is the best way to show your dog affection but if it could talk it would have a chance to stop you in your tracks. Dogs actually feel threatened when their neck and body are being held tightly and would much prefer their backs or bellies to be rubbed. This is not to say all dogs hate hugs, but it depends on how familiar the dog is with the human in question (no strangers please). Let your dog initiate the affection and read their body language to determine if the dog is comfortable.

While humans take in the sights and sounds of their environment, dogs take in the smells. A dog enjoys the outdoors because it gives them the opportunity to explore their world and sniff everything. Nothing, however, is more frustrating for a dog than getting his leash yanked each time he is attempting to sniff. It’s the equivalent of going shopping in your favorite mall, and each time you go to enter a store, your friend drags you away. Let your dog enjoy a few moments in the new environment and even mark some territory on the way.

Don’t shout at your dog. No one likes to be shouted at and neither does your dog. Even though they may not understand what you’re saying, dogs easily register good and bad emotions. Striking the dog is also not good practice as it creates a sense of mistrust between the dog and owner. It is best to practice positive reinforcement to get your dog to behave well because continued shouting and lashes will become redundant and ineffective.

This is one of the most upsetting things to do to a dog as it can result in excessive displays of aggression. Humans have never been fond of teasing, and it has caused many conflicts, so there is no reason why dogs should accept it. Teasing a dog can take many forms such as yanking its tail, barking at it, or waving at a dog who is clearly disturbed by your presence. What may seem humorous in the beginning can turn out to be a very dangerous endeavor if the dog gets loose.

We have many sayings about not waking someone who is sleeping, and one of the more famous sayings is ‘let sleeping dogs lie.’ This is a metaphor, but the statement can also be taken in its literal form. Owners should avoid wakening their dogs for dogs hate to have their sleep interrupted. Children are especially guilty of this, not considering the dog but only interested in playing at that exact moment. Touching older dogs with poor hearing when they’re sleeping, can startle them. If you absolutely have to wake the dog, do so in a calm, soothing manner.

In this regard, dogs are very similar to young children who need a routine and structure to function. Just as with toddlers, who have a scheduled naptime, playtime, food time, etc., dogs like to have a schedule of their daily happenings. When a dog gets accustomed to being taken on a walk at a certain time, like clockwork you can expect to see that dog come with his leash in the mouth each day at the same time, alerting you that it’s time. The same is true for regular dog training sessions. Not maintaining these routines can make the dogs very confused and frustrated and may even result in erratic behavior.

Having a leash or collar too tight around a dog’s neck can be painful and distressing. This doesn’t only have a negative physical reaction to the dog; it also sends a message to the dog that their owner is insecure and doesn’t trust them. In protest the dog might bark excessively, causing an even tighter grip on the leash, creating a cycle that might not be easily remedied. While you are at work, allow the dog time to roam freely within the confines of your home.

Beach Day With Your Dog: Here’s How To Have Fun

“The best therapist has fur and four legs.” Summer is here, which means it’s time…

How To Manage Your Dog’s Anxiety While You’re Away

Dogs are naturally pack animals, so they can become anxious when they are left alone…