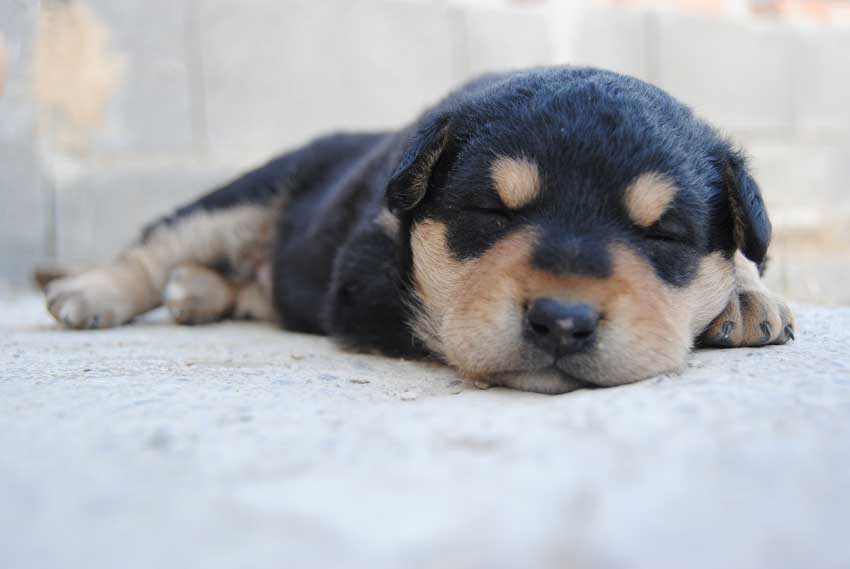 When they aren’t playing, barking, or eating, dogs are generally sleeping most of the day. They curl up and rest until they hear a treat bag opening, a knock on the door, or a jungle of the leash. So, what exactly are dogs doing while they are sleeping?

You may notice that your dog whimpers, twitches, or moves his legs while he is sleeping. Does this mean dogs are dreaming? Research suggests, yes, dogs do, in fact, dream just like humans. Some studies focus on precisely what’s going on in a dog’s brain while they are napping throughout the day.

How Much Do Dogs Sleep?

According to the National Sleep Foundation, dogs typically sleep a good 12 to 14 hours in a 24-hour cycle. Puppies may sleep even longer because they exert so much energy during the day and need more sleep to fuel their growing bodies.

Puppies can sleep up to 20 hours a day! But, not all of this sleep comes at once. Sleep patterns and needs can also vary by breed. For example, working dogs like German Shepherds may sleep less during the day, whereas much larger dogs like Great Pyrenees are known for their sleepy behavior.

What Happens When a Dog Sleeps?

A typical day for a human is to wake up in the morning, stay awake all day, and then sleep at night. The amount of activity humans do during the day requires us to sleep for an extended period at night to restore our bodies.

The same is not true for dogs, however. The National Sleep Foundation explains that dogs usually sleep for shorter periods. They may be sleeping soundly, immediately get up, and be ready to play if they hear their names, resulting in interrupted sleep.

This may mean they only get a few minutes of shut-eye before waking, which means they don’t enter REM sleep. Dogs are most likely to enter REM sleep during more extended periods of rest, such as overnight or a long afternoon nap.

What is REM Sleep?

REM stands for rapid eye movement. According to WebMD, your eyes are moving around during REM sleep but not sending any information to your brain. This increased brain activity results in dreams. Research suggests the same sleep cycles happen in dogs.

One study looked at the electrical movements in six Pointer dogs’ minds both during waking and sleeping hours. The study found that the dogs spent roughly 12% of the time in REM sleep, and there was an average of two REM cycles per day.

According to Very Well Mind, REM sleep is closely connected to the part of your brain associated with learning and memory. Dreams could be your brain’s way of reviewing the day’s activities in a “safe space” without any outside interference. The process of consolidating memories and working out any issues is an integral part of REM sleep for humans and dogs.

While it may take humans about 90 minutes to enter REM sleep, Live Science suggests it only takes about 20 minutes for dogs to reach that sleep phase. And dogs only stay in REM sleep for a few minutes, on average, but they can have several REM sleep cycles throughout more extended periods of rest.

You can tell if your dog is in REM sleep by observing him closely. During REM sleep, your dog’s breathing may become irregular, and his muscles may twitch a bit.

A study done at the Massachusetts Institute of Technology Picower Institute for Learning and Memory looked at rats’ dreams. The study first trained the rats to find rewards in a maze using audio cues. One sound would indicate the treat was on the right side of the maze; a different cue would mean it was on the left.

Then, researchers were able to study the neuron signals in the rats’ brains while they slept and found that they mimicked the signals that appeared during the maze exercise. Furthermore, when researchers replayed one of the audio cues, the rats would dream about the part of the maze associated with that cue. The signals were so similar that researchers could tell exactly where the rat was in the maze during its dream.

This study aims to show that rats do indeed dream. Psychology Today takes it one step further. It claims that since a dog’s brain is more complex than a rat’s brain, one would reasonably assume that dogs dream, as well. And since it’s pretty evident that rats dream about their daily activities, dogs would do the same.

What Do Dogs Dream About?

So, what do dogs dream about specifically? It’s impossible to know a dog’s exact dreams because they can’t tell us. But, research suggests dogs dream about what humans dream about – daily activities. While humans may dream about something that happened during their day or about a problem on their mind, dogs seemingly do the same.

The dream study in rats provides some evidence for this. Since the signals transmitted during the maze activity were the same as the signals transmitted during the dream cycle, researchers are reasonably confident that the rat was dreaming about its daily activity: running in a maze. Rats could even be using the REM sleep dream cycle to work out problems associated with the maze.

Therefore, researchers believe that dogs would do the same as rats. A dog’s dream may involve running, chasing an animal or toy, or playing. Those dreams may be why you sometimes see a dog’s leg move or twitch or hear sounds from your dog. It’s very well possible your dog is trying to chase or bark at something.

Since research shows dogs dream like humans dream, researchers say it’s safe to assume that they also have nightmares. There is not much research on this subject, however.

The research surrounding animals and sleep supports that dogs do enter REM sleep and are likely dreaming during that phase. While we may never know exactly what dogs dream about, researchers believe dogs dream about their daily activities, much like humans.