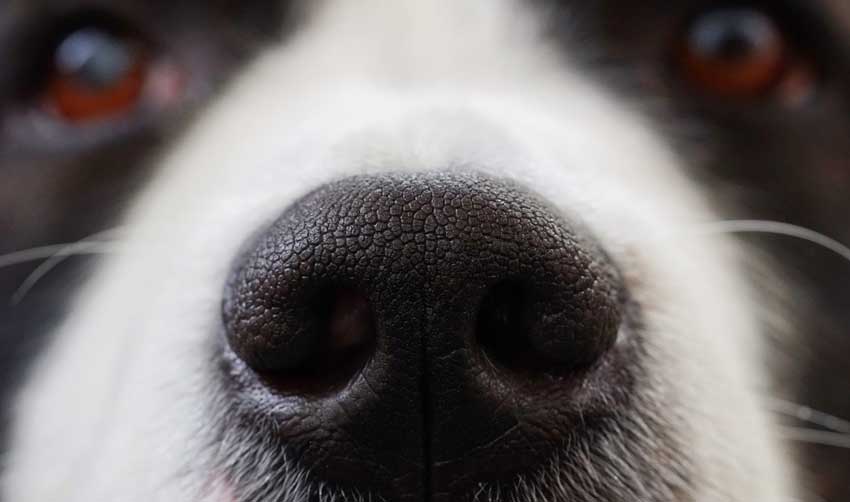 Have you ever wondered why your dog’s nose is wet? Our noses work just fine dry, so why are dogs’ noses wet? Turns out, there are many reasons why dogs have wet noses – and a misconception about what a wet dog nose really means.

Why are Dogs’ Noses Wet?

Here are  5 reasons for a wet dog nose.

Most dog owners know that panting cools our dogs rather than sweating, but this isn’t technically true. Dogs do sweat – by secreting moisture from their nose and paws. A very wet dog nose may be your dog’s way of releasing heat after physically exerting himself.

When your dog sniffs the environment outside, it’s a diligent process where that dog nose is being shoved across leaves, grass, dirt, and so on. Dogs often pick up moisture from the environment, making them wet and cold.

When following specific scents, a dog’s nose makes a thin layer of mucus that absorbs scent chemicals and, in turn, smells better.

4. Dogs lick their noses a lot

This one seems to be pretty obvious, but there’s more to it – namely, why dogs lick their noses. Research suggests two main reasons.

First, their snouts and noses can get pretty dirty in a hurry, especially when rooting around in their food. Licking the nose is a means to clean it off. Secondly, dogs lick their noses with a mucus that picks up scent chemicals easily. Dogs lick off those scent chemicals so that the olfactory glands in their mouth can sample the smell.

5. Dogs are born this way

Certain dog breeds have colder, wetter noses than other breeds due to their genetics and other factors.

A dry dog nose does not necessarily mean that your dog is sick.

Since we’re on the topic, let’s dispel a myth. You may have heard tales of how a warm, dry dog nose means that your dog has fallen ill. In fact, you may have spent some time in the veterinarian’s office due to this piece of information. However, this just isn’t true.

Speak to your veterinarian and they’ll tell you that the moisture level of your dog’s nose has little to do with whether she’s sick or not. Some dogs, by nature, simply have wetter noses than others. So, a dry nose may be completely normal for your dog.

Furthermore, the moisture level of your dog’s nose will likely fluctuate on any given day. It’s possible that your dog’s nose is wet in the morning, dry during midday, and wetter than ever in the evening. In addition, note that dogs can become ill even if their noses are wet.

Instead of being paranoid over the moisture level of your dog’s nose, keep an eye on the discharge coming from her nose. If the mucus is crusty or is getting thicker, this may be an indication that something is wrong.

4 Helpful Tips When Feeding Your Dog a Balanced Diet

If your pet dog is not eating a nutritious and balanced diet, it could end…