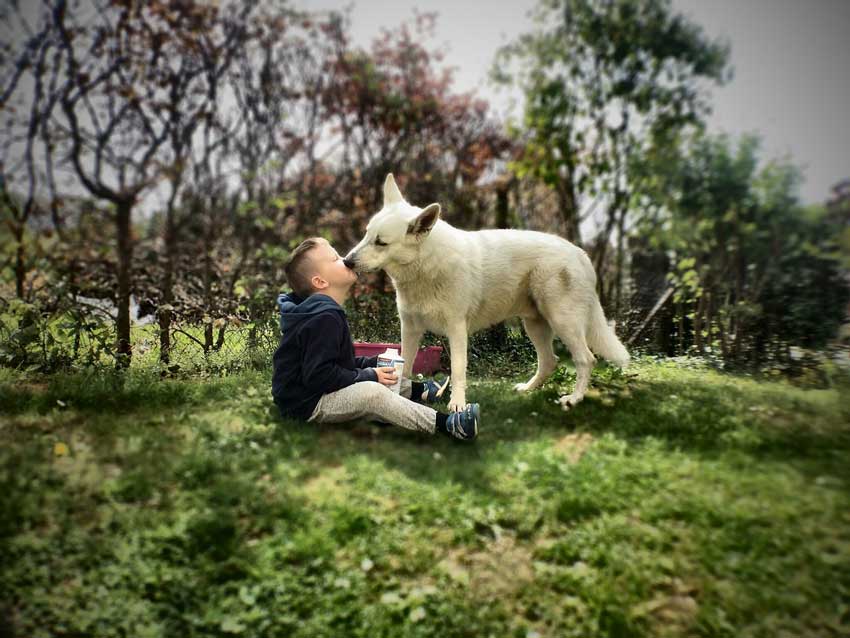 As a dog enthusiast, I’m often asked why dogs lick people. Dogs are notorious lickers; whether it’s your face or an achy paw in need of some attention, their slobbery chops are on the case.

The instinct to lick begins in puppyhood. According to veterinarian Dr. Susan Martin, young dogs typically use the behavior to encourage their mother to regurgitate food. It can also be used by mothers to trigger the puppy’s breathing and bowel movements by licking the perineal region.

It’s her way of communicating with her young — a lick can be a sign of affection or a pragmatic solution to keeping her pups clean and healthy.

Moreover, because dogs are pack animals, the instinctual impulse of licking is also used by subordinate dogs to show submission to more dominant dogs, who often lick the inside of their mouths to maintain pack harmony.

But what does it mean when a dog licks a human? Like intraspecies reasoning, when your dog licks people, it’s often an act of bonding; however, licking may also indicate submission, boredom, or possible infection or illness.

Licking as a Form of Bonding

Many pet owners often interpret their dog licking people as a sign of affection, and they aren’t wrong. From an evolutionary standpoint, wolves will lick pack members when they return home to show tenderness. Your homely hound may be doing the same thing.

From youth, dogs employ licking as a communication tool. If your pup is prone to boredom, they could be asking for a tasty snack, requesting to go outside, or imploring you to play fetch.

However, a slobbery lick on the face may indicate that they like the way you taste or want to clean you up.

When we sweat, our skin expels a mixture of water and minerals, including a small amount of salt. According to a Monterrey Institute of Technology study, dogs have 1,706 taste receptors on their tongues and an inclination toward salty foods. So next time you’re met with a sloppy kiss after a laborious workout, you’ll know why.

Licking as a Show of Appeasement

When communicating, dogs use body language, which can often be quite complex: muzzle, ear, or lip licking can be a bid for attention or avoidance of conflict amongst dogs. When a dog licks a person, it may indicate the same.

It’s common for dogs to lick people exhibiting high levels of stress or excitement to comfort the human or de-escalate the behavior. The licking may also be accompanied by yawning, sniffing, or scratching to provide a distraction and calm the dog when unsettling situations arise.

Licking can also indicate your dog’s passive submission. According to a dissertation by Rebecca K. Trisko, muzzle-licking is a formal display of submission amongst dogs. A lick on the mouth from your furry friend may also indicate a show of obedience or subjection.

Licking as an Indication of Unease

Other times, a lick from your pooch may not be about you at all. Licking can often be a sign of your dog’s nervousness or physical discomfort. Specifically, if the licking is accompanied by shaking, drooling, or hugging, your dog may be overly stressed or seeking comfort.

In terms of physical discomfort, your dog may be suffering from nausea, hunger, or dehydration. However, licking may also be a symptom of something more serious.

A research study conducted by the Journal of Veterinary Behavior found that dogs who excessively lick you or other surfaces may suffer from gastrointestinal disorders. It may also signal oral disease, cognitive dysfunction, or central nervous system disturbances, such as brain tumors.

Excessive licking may also indicate a compulsive disorder, which is often triggered by stress or lack of mental stimulation, whether among humans or other dogs.

It’s also essential for owners of excessive lickers to not only mitigate anxiety-inducing triggers but avoid punishing the dog for its behavior, as this will lead to more discomfort, and the licking may worsen. Instead, it’s recommended to replace the compulsive behavior with more stimulating activity or encourage the dog to sit or lie down when an excessive-licking episode begins.

So, pay special attention next time your dog starts licking to see if it’s more than your dog imploring for love.

Though a slobbery lick may be the last thing you want, it may provide some medicinal benefits.

Dogs’ saliva contains antibiotic compounds, including histatins, which have antimicrobial and antifungal properties. The histatins fend off infections by killing harmful microorganisms.

It may help to ask for a healing lick from your furry friend if you have a wound. Canine saliva contains a protein called Nerve Growth Factor (NGF), which can potentially heal human cuts lickety-split.

Nonetheless, keep in mind that infections from dog licks can occur, though they’re rare and are treatable with penicillin or other antibiotics. Canines are known to eat questionable substances, including feces. Remnants of this rancid snack may transmit to you through a loving lick. While research observes that dog saliva inhibits E. coli growth, it may be best to avoid a kiss if your pup has recently stuck its nose into something unpleasant.

Additionally, to avoid serious infection, it’s vital to vaccinate your dog against viral diseases like rabies, a saliva-borne virus.

How to Mitigate Licking

If you want to remedy your dog’s licking behavior, you must identify the motivation behind it. However, keep in mind that licking is instinctual to dogs, and the behavior cannot be entirely eliminated.

If your dog is a casual licker, one quick fix is to distract your dog with another activity, whether it’s a chew toy, a tasty treat, or a stimulating walk. Although, if your dog struggles with anxiety, it may be more advantageous to embark on a more peaceful or slow-moving walk.

Correspondingly, if your dog is a compulsive licker, set up an appointment with a veterinary behaviorist or trainer to identify a medical or behavioral remedy.

7 Reasons Why Your Rottweiler Growls at You

Do you have a Rottweiler that growls at you? If so, don't worry - you're…

French Bulldog Behavior Problems: How to Address the Most Common Issues

Many people think that French bulldogs are the perfect dog breed. They are small, low-maintenance,…